Boaties are being urged to bring in broken lines and rubbish from their fishing trips after a dead baby dolphin was recovered from Tāwharanui beach in Auckland.

The Department of Conservation and Ngāti Manuhiri as mana whenua are urging all boaties to bring in broken lines and rubbish from their fishing trips after a dead baby dolphin was recovered from Tāwharanui beach in Auckland at the weekend. Dolphin are taonga species that need protection and care. 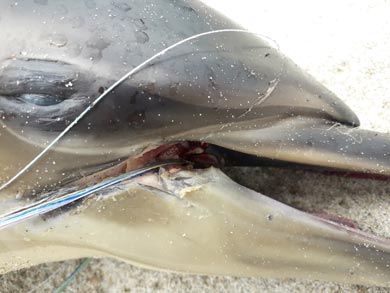 "This would have been a horrible death for this young female common dolphin and distressing for its mother who would have still been feeding it."

The calf looks like it became entangled in the discarded braid, possibly amongst weed on the seabed.

The braid the dolphin was entangled in is typical of the type used for pelagic fishing, with fishing equipment posing significant risk to marine mammals and other sea life.

Thelma Wilson says this death could have been easily avoided. "It's a timely reminder for fishing operators and boaties to dispose of all rubbish and equipment taken out to sea responsibly."

"We all need to do our bit to keep New Zealand's natural environment free of litter. Litter harms our environment, our soil, our waterways and wildlife."

DOC and Ngāti Manuhiri encourage all fishers and boat owners to be prepared to carry their litter away with them. If you see litter on the beach pick it up, even if it's not yours, to protect our precious marine life from being harmed.