DOC rangers have trapped a rat at Home Bay on pest-free Motutapu Island in the Hauraki Gulf.

A DOC ranger found the dead rat on Saturday (7 July) after an intensive trapping effort by a team of rangers.

The rat had been sighted 12 days earlier (Tuesday 26 June) by a DOC ranger and his rodent detecting conservation dog following up on an earlier sighting of a rat in the same area.

The dog flushed the rat out of vegetation in Home Bay, but it escaped by jumping into a stream and swimming out of sight. 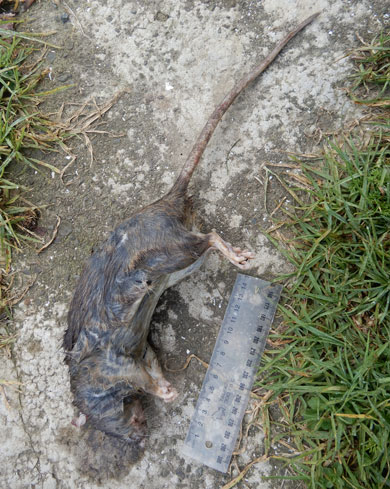 Extra traps and tracking tunnels were set in the area the rat was sighted, adding to traps and tunnels in place as part of the island’s biosecurity system.

Rat tracks were recorded on ink pads inside the tunnels, baited with peanut butter, helping the rangers narrow down the area the rat was located.

Of the extra traps, 25 were baited with peanut, walnuts and rabbit meat and eight were scented with rat odour.

“The rat was trapped in a trap saturated with rat odour. This proved highly effective in luring the rat into the trap,” says DOC Auckland Inner Islands Operations Manager Keith Gell.

“Catching the rat has been a great team effort. It shows our biosecurity systems to protect the pest free islands in the Hauraki Gulf are effective.”

“The biosecurity systems are in place because there’s an ever-present risk of a rat, mouse or other pest animal making it to one of these islands.”

“We want to remind boat owners to make sure there isn’t a rat or a mouse stowed away on their vessel, whenever they’re heading out to sea in the Hauraki Gulf,” says Keith Gell.

Rats are a major threat to native wildlife. They eat eggs and chicks of native birds. They eat native lizards and weta. They also eat seeds and flowers depriving native birds of food.

Motutapu has been free of rats, stoats, possums, mice and other animal pests since 2011. The island is home to threatened native birds including takahē, Coromandel brown kiwi, tīeke/saddleback, pōpokotea/whitehead, tūturuatu/shore plover and pāteke.