The pitter patter of little takahē feet is on the cards at Kahurangi National Park after the first eggs of the new wild population have been found. 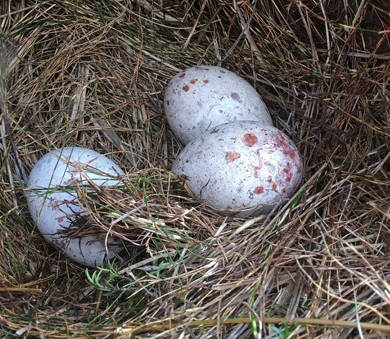 Takahē trio Te Uatorikiriki, Rerehu and Pipper have successfully laid three eggs in one nest at Gouland Downs, while other takahē have also been observed undertaking nesting activity.

Takahē senior ranger Glen Greaves says this is the best indication yet that the takahē are enjoying their new home.

“Finding a clutch of eggs in their first breeding season in ‘the wild’ is a really positive sign.”

“When we moved the first takahē to Kahurangi in March this year there was always – and remains to be – an element of the unknown. We make decisions based on the best science and evidence at the time but we’ve been watching closely to make sure they’ve settled into their new home OK. Since March, the birds have not dispersed very far from the release site which means they’re pretty happy in that location.”

The 30 founding birds included 7 established adult breeding pairs – all of which had successful breeding records together. However, it appears that now in the wild with no fences to separate the pairs there has been several divorces and a bit of partner swapping going on with new pairs forming, Glen says.

“As with any translocation, things can be a little unsettled for a while. There’s some evidence of fighting between males over females and territories – which is normal behaviour – but that means it could be a year or two before there’s true harmony in the neighbourhood and we see a significant level of breeding.”

“The fact that despite having an entire national park on their doorstep they’ve chosen to stay in close proximity shows us they’re not too bothered though.”

Takahē breeding season generally starts in October and there’s still plenty of time for more of the pairs to settle down and attempt to nest this breeding season. However, with a lot of the birds being comparatively young, inexperienced breeders the team aren’t expecting huge numbers this year, Glen says.

“The team will continue to monitor the population closely over the next few months.”

Gouland Downs in Kahurangi National Park became the first wild site for takahē outside of the Murchison Mountains in Fiordland in March this year. It is the only place in New Zealand where people can see takahē in the wild – while they take on the Heaphy Track.

The Takahē Recovery Programme will continue to release birds to the new site to help accelerate the population establishing in Kahurangi National Park. An additional 10 young birds are earmarked to join the Gouland Downs population in early 2019.

November 20 this year marks 70 years since takahē were rediscovered in the Murchison Mountains. The Recovery Programme along with Ngāi Tahu and national partner Fulton Hogan are thrilled to receive these positive results from Kahurangi to help celebrate the occasion.