The fungal plant disease myrtle rust has been found on Kermadec pohutukawa trees on Raoul Island.

The Ministry for Primary Industries (MPI) and DOC are working together to address a confirmed find of the fungal plant disease myrtle rust on Kermadec pohutukawa trees on Raoul Island. 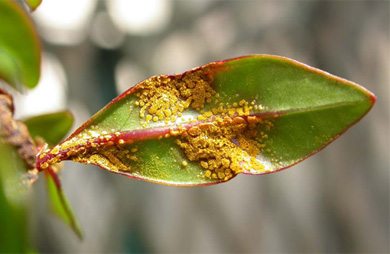 Myrtle rust (Puccinia psidii), also known as guava rust and eucalyptus rust, is a fungal infection that could have serious impacts on a wide range of plants in the myrtle family. If it were to enter mainland New Zealand, it could affect iconic New Zealand plants pohutukawa, kanuka, manuka and rata, as well as commercially-grown species such as eucalyptus, guava and feijoa.

“It’s over one thousand kilometres to the northeast of Northland and access to the island is strictly controlled and only by permit. Those visiting Raoul Island are mainly scientists and maintenance people, mostly working for DOC.

“Our focus right now is to do what we can to protect the unique Raoul Island ecosystem from this disease, and to prevent the further spread of the fungus to mainland New Zealand.

“We’re working closely with DOC, iwi and local authorities on a range of options and will do everything feasible. We will be taking the advice of a number of technical experts in this field, including in Australia where they have experience in dealing with myrtle rust.”

Mr Gwyn says strict precautions are in place to make sure people, equipment and samples being brought back to mainland New Zealand pose no risk of transmitting infection.

New Zealand already has stringent biosecurity measures to protect against myrtle rust introduction, including a complete ban on imports of cut flowers and foliage from myrtle species from New South Wales, Queensland and Victoria. Myrtle rust is well established along the eastern seaboard of Australia and in New Caledonia.

Anyone believing they have seen myrtle rust on plants in New Zealand should call MPI on 0800 80 99 66. Do not attempt to collect samples as this may aid in the spread of the disease.