Three juvenile whio were returned home recently to the Pureora Forest after having been rescued as eggs and raised in captivity.

This is the happy ending to an earlier reported story of a whio nest, disturbed by accident at Blackfern Lodge in August. Quick thinking saw the three unbroken eggs whisked to the Otorohanga Kiwi House on a soft bed of towels and hot water bottles.

The rescued eggs were passed from the Kiwi House to the next volunteer in line, bird rescue rehabilitator Judy Fentress from Te Awamutu. She hatched the eggs and cared for the ducklings to 6 weeks of age. They then returned to the Kiwi House for another 6 weeks taking advantage of the larger aviary and pond. The juveniles then went on to the whio crèche at the National Trout Centre in Turangi, run by DOC staff and interns, to learn how to swim in fast water and feed for invertebrates off rocks, preparing them for their release back into the wild.

The lodge have reported that the parents that lost their nest went on to have a second brood and raised two ducklings this season. 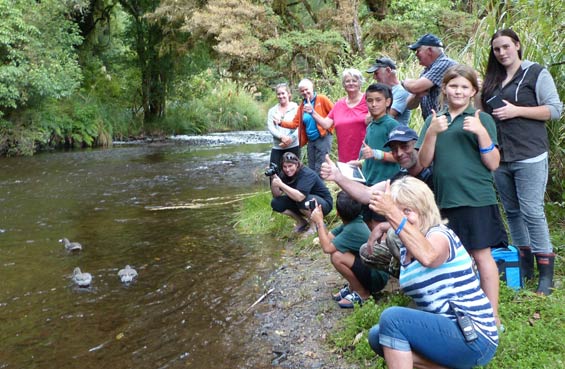 A group of volunteers who work with whio released the birds at Ongarue River. Present were the Tuffins of Blackfern Lodge and predator trapping family the Parks. Their joint project 'The Blackfern Lodge Ecological Restoration Project' is funded by the Central North Island Blue Duck Charitable Trust.

Mike Park, said that the whio started feeding in the water immediately following their release, "It was a joy to see, it was an extra bonus to learn that one is a valuable breeding female". 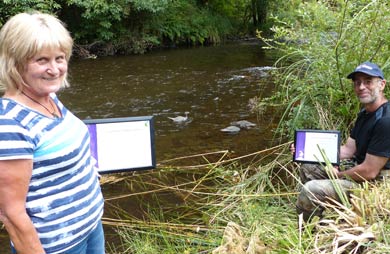 Maria Tuffin of Black Fern Lodge and predator trapper Mike Park with their certificates of appreciation for their contribution to whio recovery work, at the Ongarue release of saved whio

The Tuffin's of Blackfern Lodge and the Park Family were presented on the day with certificates of appreciation by the Department of Conservation for their contribution to whio recovery work.

Genesis Energy and the Department of Conservation have partnered together to secure the future of the whio. Operating as Whio Forever this partnership is fast tracking implementation of the national Whio Recovery Plan to protect whio and increase public awareness. The support of Genesis Energy is enabling DOC to double the number of fully secure whio breeding sites throughout the country, boost pest control efforts and enhance productivity and survival for these rare native ducks.

The whio is a threatened species of native duck that is only found in New Zealand's fast flowing waters. Featured on New Zealand's $10 note and with an estimated nationwide population of less than 2500 birds, whio are rarer than kiwi. Whio are adapted to live on fast-flowing rivers so finding whio means you will also find clean, fast-flowing water with a good supply of underwater insects.This makes whio important indicators of ecosystem health – they only exist where there is high quality clean and healthy waterways.

The whio are eaten by stoats, ferrets and cats, with the largest impact during nesting time when eggs, young and females are vulnerable, and also when females are in moult and can't fly.Extensive trapping can manage these predators and work in key whio habitats by DOC and Genesis Energy on the Whio Forever Project has already seen an increase in whio numbers.Whio cannot be moved to predator-free islands like other species because of their reliance on large fast-flowing rivers.Pairs occupy approximately 1km of water – so they need a lot of river to sustain a large population and they fiercely defend their territories, which makes it difficult to put them with other ducks in captivity.

They are susceptible to flood events which, destroy nests, fragment broods and wash away their valued food source.