South Island kākā have made an extraordinary comeback in a Fiordland forest since pest control started just over a decade ago, recent study results show. 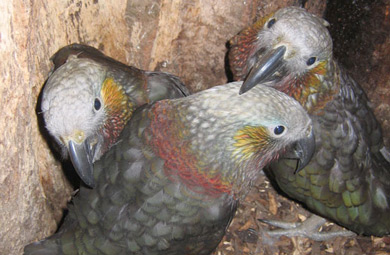 In the mid 2000s the kākā population in Waitutu Forest was being ravaged by stoats and possums with female birds and chicks the prime victims as they nested in tree cavities. Monitoring showed that males outnumbered females by an average of six to one.

A population sample taken in the remote lowland forest in December last year shows a turn-around in the parrot's fortunes with female kākā rebounding and young birds on the rise again.

DOC scientist Terry Greene, who sampled kākā at Waitutu in 2005—2007 and again last year, says the result is phenomenal.

"The proportion of female kākā has increased almost four-fold since the last survey and juvenile kākā by a factor of twenty."

"We knew that kākā were recovering but to find such strong evidence was hugely satisfying."

In 2005—2007 male kākā outnumbered females by six to one and no juveniles were seen or caught. This year the margin has dropped to 1.7 times more males than females and 20 juveniles were caught as well as many fledglings seen, says Terry Greene.

Pest control at Waitutu Forest, in Fiordland National Park, has included localised trapping and poisoning for stoats and possums and three treatments of aerially-applied 1080 over up to 30,000 hectares when pest numbers have been high due to forest seeding.

Annual bird counts at over 700 points in the forest also show an increase in other forest birds such as robin and kākāriki.

The pest control programme at Waitutu Forest has been supported by the Waitutu SILNA (South Island Landless Natives Act) Māori owners and the Nature Heritage Fund, which contributed $1.7 million for pest control.

Waitutu Forest covers some 45,000 hectares of south eastern Fiordland and is one of the largest tracts of unmodified lowland forest left in New Zealand. It has an important South Island kākā population, small numbers of endangered mohua/yellowhead and many other forest birds such as robin, rifleman, kākāriki and ruru/morepork.