One of New Zealand’s rarest animals the tūturuatu or shore plover is now even closer to extinction after one was found dead in Westshore this week.

The bird, named Obow after her leg bands, was found by a member of the public all the way from her Waikawa Island home off the tip of the Mahia Peninsula.

At times these birds like to visit the shores and rivers of the greater Hawke’s Bay area. 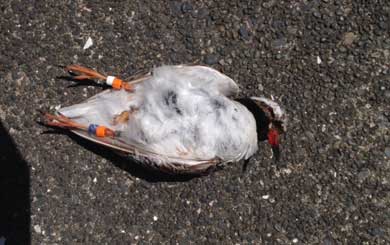 After Obow was handed over to Department of Conservation staff she was sent to Massey University where an autopsy will be performed to determine the cause of death.

DOC Hawke’s Bay’s Operations Manager Connie Norgate said while the bird appeared to be in good health, the team at Massey did find some small pinprick sized holes in its chest.

“This suggests to us that this bird may have been killed by a predator,” she said. “Tūturuatu are highly susceptible to predation – a single rat can wipe out an entire population. This makes biosecurity and pest control highly essential to protect this species.”

With only 250 left in the wild, the tūturuatu is critically endangered with the last naturally occurring population found on the remote Chatham Islands.

However, thanks to the captive breeding programme at Pukaha Mount Bruce and The Isaac Conservation Wildlife Trust, birds can be sourced to populate suitable new locations.

Ms Norgate says Waikawa Island has proved to be such a location.

“With limited predator free offshore islands with appropriate habitat, places like Waikawa are incredibly valuable for the future of this species,” she says.

“The more secure and safe population that can be built up will mean that this species has a better chance of survival. It also means that every single one of these birds count if we are going to save them from extinction.”

It reminds us that projects such as Predator Free 2050 are more important than ever.

Ms Norgate asks the public that if they see a tūturuatu please report these sightings to Nature Watch at or to their local DOC office.

“If you can observe the colours of the leg bands that can provide a lot of useful information to us,” she says.

The survival of the endangered shore plover relies on island biosecurity, captive breeding, and translocations to predator-free islands.

iNaturalist NZ and other sites can help you to identify a plant or animal species.