The Mount Allen buttercup was found by DOC botanists on a remote mountain range on Stewart Island/Rakiura.

Department of Conservation botanists have found a rare native buttercup on a remote mountain range on Stewart Island/Rakiura. 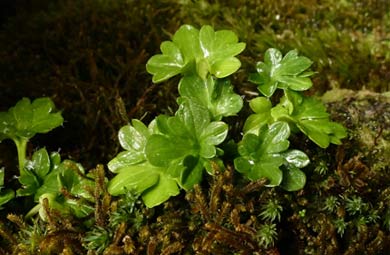 The DOC team spotted the Mount Allen buttercup (Ranunculus viridis) growing on a mountainside in the Tin Range during a dedicated survey last month.

"We’re really pleased to have located this buttercup and to find that there don’t appear to be any immediate threats to its survival."

"Mount Allen buttercup is naturally rare because it lives in a specialised sub-alpine habitat and is one of a number of endemic plants found only on Stewart Island."

The survey also enabled two rosettes to be collected, which are being grown in a climate-controlled glasshouse at the Dunedin Botanic Garden, says Brian Rance.

"The Dunedin Botanic Garden is helping to conserve the Mount Allen buttercup by propagating and studying this obscure plant and hopefully being able to grow an insurance population."

Ranunculus viridis was first discovered in the early 1980s by botanist Hugh Wilson and was also seen by a party of botanists in the early 2000s.

The plant has the highest threat classification of ‘nationally critical’ and was on a priority list of little known species for DOC to assess its population size, threats and management needs.

New Zealand has 45 named species of buttercup (Ranunculus), of which three are found only on Stewart Island/Rakiura. Our most well-known buttercup is the large and showy Mount Cook buttercup.

Stewart Island/Rakiura is a hotspot for endemic plants with at least 28 native plants, many of them alpine species, found there. With its extensive intact natural areas, the island is an important place for plant conservation nationally.

To the south of New Zealand's South Island, Stewart Island/Rakiura is a one-hour ferry ride from Bluff or 20 minutes by plane from Invercargill.