The wait is over for fans of the DOC ‘Royal cam’ as the albatross nest at Pukekura/Taiaroa Head on Otago Peninsula is home to a new chick hatched over the weekend. 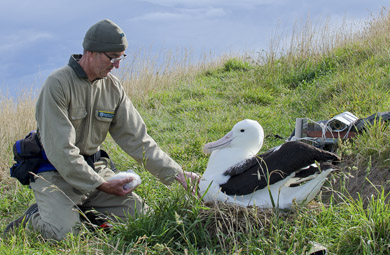 Royal cam was an online phenomenon last year that took everyone by surprise, totalling more than one million social media interactions including over 600,000 YouTube views through the course of the chick’s fledging period.

"We are thrilled by the response of viewers from New Zealand and around the world to our albatross chick,” says DOC’s Threatened Species Ambassador Nicola Toki.

“The use of webcams is new to DOC and the overwhelming enthusiasm and positivity has allowed us to showcase some of our important albatross conservation work to the world.

“We’ve all got our fingers crossed, as this little bird faces a whole raft of challenges in its first months. These include extremes of weather, reliance on both parents to provide enough food to get through winter, as well as threats from stoats and other pests,” says Ms Toki.

DOC’s team and the staff at the Royal Albatross Centre are hoping to repeat the success of last year’s chick, Moana, who made it through the trials of early life to fledge the nest in September last year.

“The Royal cam community has been incredible. We have people visiting the Centre who have been watching and learning from the live stream. As well as seeing Moana grow up, they’ve been following the birds courting, mating, and egg laying. And more recently, days of anticipation watching the latest egg hatch. Royal cam is certainly an incredible conservation outreach tool,” says Ms Toki.

The egg was laid on 12 November 2016 and since then the parents (known as BK and RBK) have been taking turns on the nest. They will now continue to take turns feeding the chick for the next five or six weeks. They then leave the chick unguarded, except for feeding visits, until it fledges (is ready to fly) at about eight months. The sex of the chick is unknown at this stage.

“All going well the web cam will film the chick over the next eight months,” says Ms Toki

“Tune in to see both parents working around the clock to raise the chick and the DOC rangers who monitor and care for this family."

Rangers are now putting in 12 hour days through the egg-hatching season to ensure these chicks have the best possible chances of survival.

In spring, the chicks will leave Taiaroa Head to spend 4-10 years circumnavigating the Southern Hemisphere.

You can watch the albatross chick on http://www.doc.govt.nz/royalcam.

Albatrosses are the world's largest seabirds. They spend at least 85% of their lives at sea returning to land (usually remote islands) to breed and raise their young.