An elite squad leading the fight to rid New Zealand of predators has received reinforcements today, with four puppies to join the Conservation Dogs Programme, thanks to major partner Kiwibank.

The new Border Terrier-cross pups will undergo specialist training in pest detection before permanently joining DOC specialist conservation dogs unit. Two will be based in Auckland, and one each in Warkworth and Wellington. 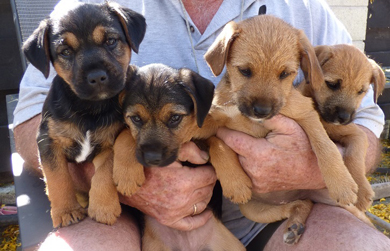 The pups that will undergo specialist training in pest detection
Image: DOC 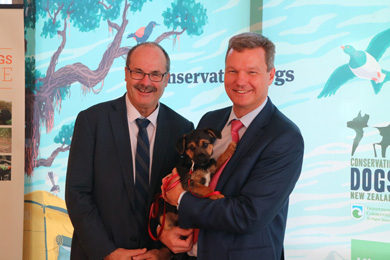 “The predator-free mission is New Zealand’s biggest conservation battle. We’re going to throw everything we can into winning this fight.

“Launched last year, the Conservation Dogs Programme has enjoyed spectacular success. The pest detection dogs are highly accomplished at find pests and the species dogs are trained to locate threatened species, for monitoring and protection purposes.

“With this expansion, we’re arming DOC with more dogs and more handlers, to move us closer to the predator-free 2050 ambition. The expanded dog unit aims to increase surveillance by 60 days per annum, quarantine inspections by 80 days per annum and improve the response time to an incursion by responding to 100% of incursions within 24 hours where a dog is required.

DOC’s conservation dogs team consists of different breeds of dogs all for different purposes. For example, pointers are often used for finding threatened species so they can be banded, monitored or moved while terriers are used to track down rats and stoats for targeted control.

“Kiwibank’s support is helping us move from the initial pilot phase into a fully-fledged programme.

“Conservation dogs are a highly effective tool for conservation and our partnership with Kiwibank means we can put these incredible dogs to work more often and in innovative ways.

“As more parts of New Zealand become predator free by 2050, conservation dogs will be vital in helping to keep those areas that way through quarantine and surveillance work and by detecting incursions early.”

Mr Wilkshire said enlisting public support for the predator-free mission and the role for conservation dogs would be a priority in the coming year. Kiwibank will utilise its nationwide network of branches and staff to educate communities on getting involved, as well as allowing people to interact with the dogs at community events and schools throughout New Zealand.

“This is a great and fun opportunity for the people of New Zealand to get involved in helping to save the country’s protected and native animals,” he said. “Even when the dogs are having a day off from tracking predators, they’re working hard to get more two-legged allies onboard.”

DOC and Kiwibank are working together to unleash the potential of our incredible Conservation Dogs, they help find protected species and unwanted pests.