A crew from Mana Cruising Club have spent a muddy, wet weekend on a little-known island in the Marlborough Sounds, after reporting for conservation duties. 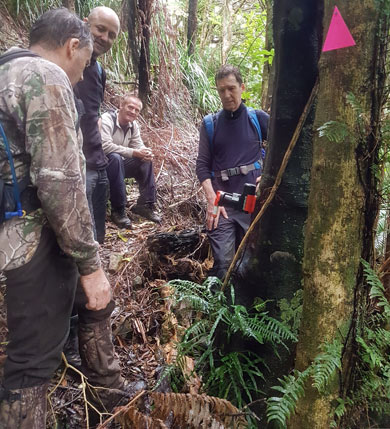 Members from the Mana Cruising Club

Pickersgill Island in Queen Charlotte Sound is a DOC Scenic Reserve struggling with reinvasion by ship rats. A network of self-resetting traps have been installed on the island and need six-monthly checks by a team of trappers.

Rob Paulin owner of the launch "Southern Cross" organised a small group of volunteers to assist DOC for the weekend but a week of heavy rain had rendered conditions challenging.

"We had a good trip over and enjoyed a blue cod dinner before the work commenced the next day in persistent rain and marginal tracks.

"Fortunately we were all equipped for it. The final day was sunny, calm and generally an easier day. All the crew enjoyed the experience and a few fish on the way home was a bonus."

Rats were successfully eradicated from Pickersgill Island by DOC several years ago, but with just 100m separating it from nearby Arapawa Island, they are likely to have swum back and re-established.

"We need to crack this common problem as part of the nation-wide vision for Predator Free New Zealand by 2050," Angus said it was a happy coincidence that led to the Southern Cross crew's arrival on the island.

"The guys approached DOC a year ago keen for some volunteer conservation work. They love the Sounds and the mooring at Pickersgill Island is a favourite overnight spot."

"By chance, we are undertaking a trapping trial on Pickersgill and the lads were available at short notice. It's quite a change from the usual day in the hills for conservation volunteers."

The newly minted trapping team will cross the strait again in 6 months to monitor rodents and recharge the traps.
"It was educational for the Southern Cross crew to assist with this work. Seeing the activity on the tracking cards after one night was an eye opener. Hopefully we'll knock the rats off and give the birds a chance on Pickersgill," said Paul.

"It was great to be able to contribute to the Sounds ecology in a positive manner and we are all keen to return. We will also spread the word at Mana Cruising Club and possibly the greater Porirua area about the excellent work that DOC is doing in the Sounds."

Predator Free 2050 is an ambitious goal to rid New Zealand of the most damaging introduced predators that threaten our nation’s natural taonga, our economy and primary sector.