DOC and Goodnature have deployed a network of self-resetting stoat traps on Great Island in Fiordland. 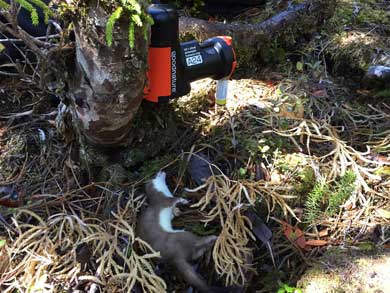 One of the stoats despatched by the Goodnature trap network on Great Island
Image: Mike Butcher ©

A pioneering venture in Fiordland National Park could provide a breakthrough in how easily and efficiently predator free island sanctuaries are created.

In a partnership between the Department of Conservation (DOC) and the conservation technology company, Goodnature, a network of self-resetting stoat traps has been deployed on Great Island (736 ha), situated in Chalky Inlet, southwest Fiordland. Some of the stoats caught on Great Island
Image: Lindsay Wilson ©

Initial results are encouraging. After just one day of the trap network having been laid, 17 stoats were killed. Based on average island data for stoat populations, it is estimated up to 30 stoats live on Great Island.

The first stoat was caught two hours after traps were deployed, and one trap had two dead stoats beneath it.

If the project on Great Island is successful, it could have far-reaching implications for the viability and affordability of future island predator eradications. It took four volunteers four days to lay the network. The self-resetting nature of the traps means they can kill up to 24 times before needing to be reset, thereby significantly reducing the labour required to maintain and check the network.

The project will have significance in helping to achieve DOC’s goal of removing introduced predators from offshore island nature reserves by 2025 and, ultimately, creating a predator free New Zealand.

“Stoats in Fiordland have been known to swim up to 2km. Islands outside the swimming range of stoats can be kept permanently stoat-free, but islands closer to the mainland, such as Great Island, are prone to stoat reinvasions even if an initial eradication is successful.

Goodnature Director, Robbie van Dam said the Great Island project was the first ever attempt to eradicate stoats from an island using only a self-resetting trap network.

“The project also aims to establish a system of constant control to suppress reinvasion, meaning these islands can remain predator free.

“It is unusual to be making an eradication attempt during summer when food levels are high and stoats can be more selective in what they eat. This will test the network further and potentially allow eradications to happen at any point of the year,” Robbie van Dam said.

The portability of A24 traps allowed more than 200 traps, donated by Goodnature, to be established and initial trapping results collected quickly, without the need for helicopter support.

“It’s easy to put 30 traps in a pack and head out on the hill to set up,” Lindsay Wilson said. “This contrasts with traditional stoat traps which are very heavy to carry, require considerable effort to establish and need to be reset after each kill.

“Ongoing monitoring will indicate whether stoats have been successfully suppressed on the island.”

Stoats are the number-one killer of many of New Zealand’s endangered native species.