Drivers urged to slow down for kea

DOC is reminding drivers to keep a close watch out for kea at Arthur’s Pass after two birds were killed.

Two kea were struck by vehicles on State Highway 73 in the South Island yesterday. The birds were hit, one of them by a truck, near Viaduct Lookout or Deaths Corner just to the west of Arthur’s Pass. A group of up to 20 birds, half of them juveniles, have been seen in the area this week. 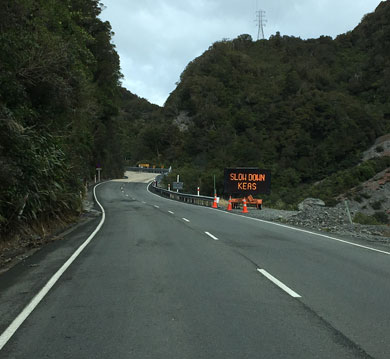 “Feeding kea affects their behaviour and can distract them, increasing their risk of being hit by vehicles.”

The NZ Transport Agency (NZTA) has electronic warning signs in the area reminding drivers to slow down and be wary of kea on the road.

“We’re asking drivers to please slow down and be aware of kea that may be on the road.

“We also strongly urge people not to feed kea as they stop at Arthur’s Pass and the viaduct lookouts.

One of the struck kea was handed into the DOC Arthur’s Pass Visitor Centre but had to be euthanised due to a broken back. The other bird also died.

Kea are drawn to areas such as Viaduct Lookout where they are attracted by parked cars and the potential to scavenge. There may also be mobs of juvenile kea congregating at this time of year.

“The NZTA is installing kea warning signs above and below the lookout points, with electronic signs in place already”, says Pete Connors, NZTA Transport System Manager.

“We encourage all drivers, even if they are driving below the speed limit on this steep alpine pass, to be on the lookout for kea.”

Kea are nationally endangered with a population estimated to be 3000-5000. The highly intelligent and curious mountain parrot is only found in South Island alpine and forest environments.

Kea are protected under the Wildlife Act 1953 and it’s illegal to harm or kill them.

People can contribute to information on kea by reporting kea sightings to an online kea database.

The endangered kea is one of the most intelligent birds in the world. This unique problem-solving parrot was crowned Bird of the Year in 2017.