Genesis Energy and DOC will continue their successful predator control and advocacy programme for the endangered whio/blue duck for another five years.

Genesis Energy and the Department of Conservation today announced the successful predator control and advocacy programme for the endangered whio (native blue duck) will continue for another five years.

Funding from Genesis Energy has enabled the Department (DOC) to optimise the operation of eight whio security sites and doubled the number of whio recovery sites in the North and South Islands.

The bulk of the funding went towards the purchase, establishment and maintenance of predator traps, resulting in the number of protected whio pairs increasing by a third in the eight security sites. 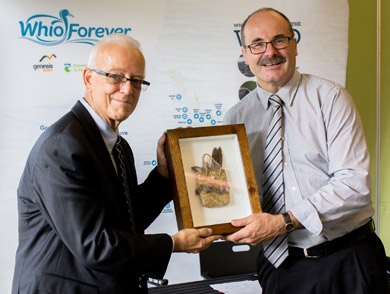 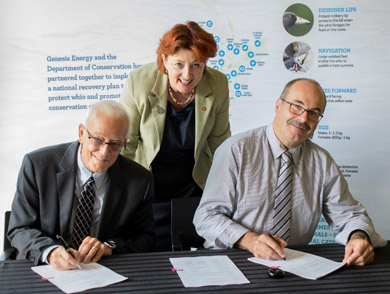 Whio Forever funds were the catalyst for building a whio hardening facility in Turangi.

The agreement signed today provides $2 million funding for the Whio Forever programme and an additional five year funding arrangement for DOC's Taupō for Tomorrow education programme, based at the National Trout Centre in Turangi.

Genesis Energy's Chief Executive Albert Brantley said the new broader agreement formalises the relationship that has evolved over the past five years or more between Genesis Energy, DOC and the Tongariro National Trout Centre.

"This is a true partnership where Genesis Energy and DOC work together at multiple levels from our respective head offices to out in the field to safeguard the future of the whio and educate the next generation of New Zealanders about our freshwater resources. Working together on these projects means that no matter what logo we wear on our jackets, we are all committed to achieve a better conservation outcome," he said.

"630 whio pairs are now being protected surpassing our original target of 500 pairs by 2019 and with 5000 more traps in place the whio habitat being protected has doubled showing the real value of a partnership such as this.

"So much has been already been achieved in the past five years, it is exciting to think about what can be achieved together in the next five years," he says.

With a large network of predator control now in place in key whio habitats, it is anticipated the bulk of the Genesis Energy funding will support DOC and volunteer community groups to continue the maintenance of the trap networks.

The Taupō for Tomorrow programme is a national leader in freshwater education for primary and secondary school students. Each year around 8,000 students attend the programme, which is delivered by a specialist DOC environmental educator.

Find out more about Whio Forever.