DOC's Takahē Recovery Programme and its new national partner Fulton Hogan welcome official figures showing the takahē population has reached over 300 birds as they released 26 takahē into the wild this month.

"From a low of 118 birds in 1981, the future is looking bright for the takahē with these young birds joining their one remaining wild population in Fiordland's Murchison Mountains," says DOC takahē ranger Glen Greaves. 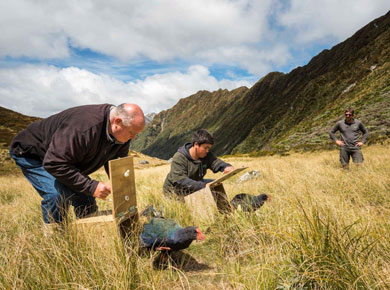 "The wild population holds the most valuable birds, in terms of genetics and the learned behaviours that allow them to survive in the mountainous habitat. The released birds are all fitted with transmitters, as are some of the resident birds, allowing us to closely track survival over the coming months."

The annual census completed in September this year, estimates there is a minimum of 106 birds remaining in the Murchison Mountains. However, the Takahē Recovery Programme has been working to create safe populations in predator-free locations across New Zealand which are now home to 200 more takahē – bringing the total population to 306.

"With treaty partner Ngāi Tahu, we've developed a successful network of scientists, veterinary support, and public and private organisations all working towards increasing takahē numbers. Since 2006 the breeding success at these sites has risen from 17 birds per season to almost 40 in 2016," says Greaves.

The success of the breeding programme and of New Zealand's largest trapping programme has seen the population in the Murchison Mountains boosted to the point where it is nearing its capacity. The next challenge for the Takahē Recovery Programme is to find a second wild site to establish a large takahē population.

"The last two years have seen record numbers of chicks and the population is now growing at nearly 10% per year," says Greaves.

"This rapidly growing population enables us to boost the wild population and look to returning takahē back to areas where they have long been extinct, fulfilling DOC's vision for the species".