DOC Director-General Lou Sanson became one of the ‘first to see the sun’ on the sacred Mount Hikurangi (Te Ara ki Hikurangi) north of Gisborne. 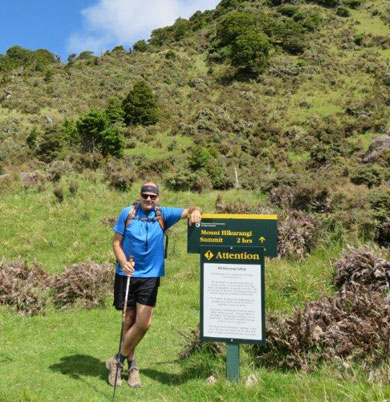 Lou Sanson at the base of Mount Hikurangi
Image: Jamie Quirk | DOC

It is a hike of a special taonga that he had talked about doing for some time, says Mr Sanson.

“The mountain on a good day has a phenomenal view of White Island in the Bay of Plenty.”

“The weather conditions were not as clear on this occasion, but this did not detract from the experience with views south to Whakapunake, Whangaokeno (East Island) and most of the Raukumara Forest Park,” said Mr Sanson.

Nine huge whakāiro, or carvings, that represent Māui and his descendants are to be found on the northern point of the mountain. These beautiful pou make up one of Aotearoa’s most significant works of art, and are a tribute to Māui and the proud cultural heritage of Ngāti Porou.

“A personal highlight was to look down this morning and see these pou (whakāiro/carvings) in amongst mist and the mountain covered in mist.  The pou are some of the best I have ever seen in New Zealand.  One regret is that not all New Zealanders could get to see it and the power of the pou under the Ngati Porou maunga.”

Mr Sanson said he was also fascinated by the vegetation so far East in New Zealand to see alpine plants large buttercups (Ranunculus spp) and Hikurangi tutu (Coriaria pottsiana) that is only present there and in Tairawhiti an alpine garden teaming with alpine flowers.  It was a very special visit for him, a personal invitation to honour the late Api Mahuika (Ngati Porou). 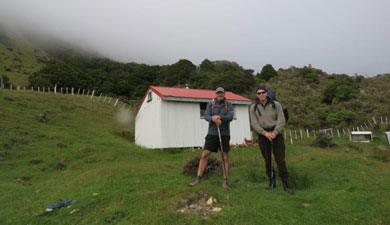 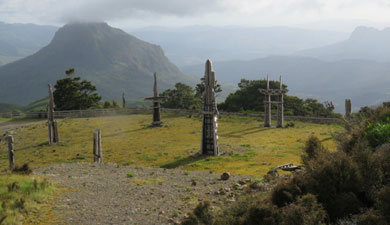 Whakāiro or carvings that represent Māui and his descendants
Image: Jamie Quirk | DOC

Less than two hours’ drive north of Gisborne, Mount Hikurangi is the resting place of Māui-Tikitiki-ā-Taranga, the famous Māori and Polynesian demi-god, who lifted Hikurangi out of the ocean when he fished up Te Ika-a-Māui, the North Island. According to Ngati Porou, Māui’s waka Nukutaimemeha lies in Takawhiti, the beautiful lake near the summit.

Visit the sacred mountain of Ngāti Porou, the highest non-volcanic mountain in the North Island.