Rare native parakeets were today released into a Canterbury high country valley using a new ‘soft release’ technique that is proving better for the birds.

The 17 orange-fronted parakeets/kākāriki karaka were taken from the Isaac Conservation and Wildlife Trust facilities at Peacock Springs, McLean’s Island, in Christchurch to two temporary aviaries in the South Hurunui valley where they will stay for several days before being set free. 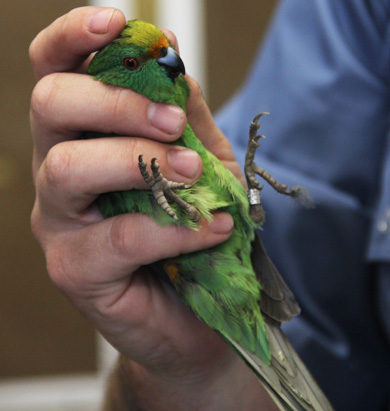 The captive-reared birds will also be offered extra food when they leave the aviary to ease them into foraging in the wild.

Orange-fronted parakeet is the rarest of New Zealand’s parakeet species with a population of 200-400.

DOC ranger Simon Elkington says use of the aviaries is showing higher survival rates than when parakeets are released straight into the wild.

“The aviaries allow the birds time to get used to their new environment and the extra food helps them through the first few days when they are adapting to finding food in the beech forest.

“It can be difficult for these young parakeets to adjust to life in a high country valley but the new ‘soft release’ method is showing promise.”

The 17 birds will boost the small remnant population of this endangered parakeet in the South Hurunui.

The aviary method was first used by DOC in December last year when five birds (four females and a male) were released in the South Hurunui with all surviving.

The fate of four male birds released at the same time but straight into the wild was not so good with three birds dying of starvation.

Intensive pest control in the South Hurunui, Hawdon and Poulter valleys, where the parakeets live, is crucial for their survival, especially when the beech forest seeds and rat and stoat numbers rise dramatically.

The Isaac Conservation and Wildlife Trust is presently the only captive breeding facility for this parakeet and provides up to 45 young birds each year.

Once common throughout New Zealand, orange-fronted parakeet now survives in just three beech-clad valleys on mainland New Zealand – the Hawdon and Poulter valleys in Arthur’s Pass National Park and the South Branch of the Hurunui in Lake Sumner Forest Park.

Stoats and rats pose the greatest threat to these remaining small populations. Parakeets nest in tree holes and the eggs, chicks and sitting adults are easy prey for these tree-climbing predators.

DOC manages the risks to the parakeets by intensively monitoring predator densities in all three valleys and undertaking pest control using a combination of traps and aerial 1080 when necessary.

‘Insurance’ populations of this species have been established on four predator-free islands: Chalky Island in Fiordland, Blumine and Maud islands in the Marlborough Sounds and Tūhua in the Western Bay of Plenty, off Tauranga.