DOC has set up a web cam beside an albatross nest at Taiaroa Head on Otago Peninsula near Dunedin.

The chick in the nest hatched five days ago and is being filmed 24 hours a day. DOC’s threatened species ambassador Nicola Toki launched the “royal cam” which went live today.

Nicola said this is the first time a web cam has been used to view an albatross at the colony. Taiaroa is the world’s only mainland royal albatross breeding colony.

“We are thrilled to share the life history of these awesome seabirds with the rest of New Zealand and the world. Few people in the world have the chance to get this close to a nesting albatross chick. It’s quite amazing to look right into the nest to see the chick’s new beginning. We are grateful to our supporters for helping make this happen,” Nicola said.

The parents take turns guarding and feeding the chick for the next five or six weeks. They then leave it unguarded, except for feeding visits, until it fledges (is ready to fly) at about eight months. The sex of the chick is unknown at this stage.

The web cam will film the chick over the next eight months. Highlights may include the part both parents play in raising the chick, DOC rangers monitoring and caring for the chick, and challenges it is likely to face such as extremes of weather, vulnerability to predators and pests and reliance on its parents to provide it enough food to sustain it throughout winter. In spring, it will leave Taiaroa Head to spend 4-10 years circumnavigating the southern hemisphere.

You can watch the albatross chick on www.doc.govt.nz/royalcam DOC ranger Lyndon, and Matt Robertson (left) and Rangi Biddle from Wellington City Council install the camera. Matt and Rangi volunteered their expertise gained from setting up the kākācam at Zealandia last year 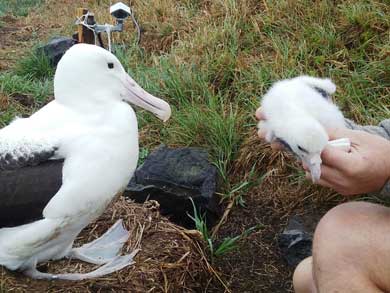 Albatross chick with dad and web cam in background

Northern royal albatross are a vulnerable species and an icon of Dunedin. They are a taonga species for Ngāi Tahu.

With a wing span of over three metres, Northern royal albatrosses are the largest seabirds in the world.

After the chick fledges, its parents will leave the colony and spend the following year at sea. They then return to breed again, completing a two-year cycle.

DOC manages the Northern royal albatross colony with the support of the Otago Peninsula Trust, Pukekura Co-management Trust and Dunedin City Council. The colony has benefited from decades of DOC’s management and predator control. It has grown from one breeding pair in 1937 to about 30 pairs in 2015. 10,000 seabirds are also thriving at Taiaroa Head, including threatened red-billed gulls and Stewart Island shags.