The ambitious Million Dollar Mouse pest eradication project on remote Antipodes Island in the subantarctic has been completed ahead of schedule, Conservation Minister Maggie Barry says.

Date:  13 July 2016 Source:  Office of the Minister of Conservation 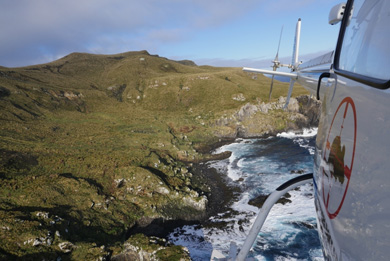 A second helicopter drop of rodent bait across the island was finished yesterday afternoon, following a first phase completed on June 29.

“Despite very unsettled weather conditions, the Million Dollar Mouse team have done an outstanding job of making use of every available weather window to get the bait drop completed,” Ms Barry says.

“This is the most challenging pest eradication ever carried out in New Zealand and is a globally significant conservation achievement, safeguarding a unique, remote and forbidding land and the many extraordinary species living there.”

Mice are the only introduced predator on the island, which is home to endemic species such as the Reischek’s and Antipodes Island parakeets, snipe and pipit, thousands of seabirds and marine mammals.

“To finish the second bait drop by mid-July is close to the best case scenario, and a major step on the way to returning Antipodes to the way it was before the arrival of humans, pests and weeds.”

Arriving on May 27, the expedition transported three helicopters, 30 tonnes of fuel, a temporary hangar and 65 tonnes of bait to the island, which lies 760 km east of Dunedin.

The team will now dismantle the hangar and other infrastructure ahead of the arrival of the cargo ship Norfolk Guardian, scheduled by the beginning of August.

Total eradication of mice cannot be confirmed until a monitoring team visit the island in 2018.

To find out more, visit the Million Dollar Mouse website.