The Tongariro Alpine Crossing remains open but walkers are asked to exercise caution when moving through flood damaged areas.

Damage has occurred on both the Ketetahi and Mangatepopo sides of the Alpine Crossing.

Between Mangatepopo and Soda Springs the main source of the damage was caused by water and rock movement. The track in the vicinity of these areas has been washed out but is still easily passable by following track markers.

“This event shows just how severe weather conditions can be in Tongariro National Park and walkers need to be aware how quickly the weather can change,” said DOC Conservation Services Manager, Paul Carr.

Walkers are asked to take extra care when passing through these two areas.

On the Ketetahi side of the Tongariro Alpine Crossing it is thought a small dam may have built up over the course of the storm and the extremely heavy rainfall may have caused water to pond behind it.

It is likely the ponded water broke through the dam during the night and washed large boulders and logs down the old path created by the 2012 Te Maari lahar.

“It never ceases to amaze me the damage that can be done as a result of extremely heavy rain and wind,” says Mr Carr.

Two new bridges, built after the 2012 eruption of Te Maari, have been covered with rocks and logs and it will be several days before these are able to be cleared. As an interim measure while the track is repaired, a diversion has been created around the two bridges and walkers are asked to follow the indicated route through to the Ketetahi carpark.

“There is a big clean up ahead for us but I am sure we will be able to get the track up and running again over the next few days” said DOC Services Ranger, Benjamin Scrimgeour.

Department staff will be working over the remainder of the week to have the track repaired in time for the upcoming weekend. 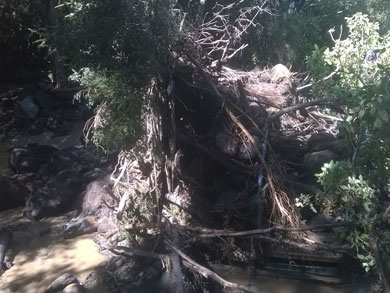 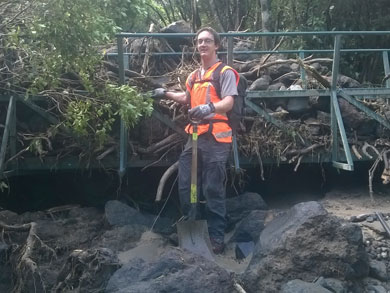 Get weather forecasts for national parks and other conservation areas, as well as severe weather warnings, the brief mountain forecast and other weather bulletins.