The invasive pest great white butterfly has been eradicated from New Zealand in a world-first achievement.

Date:  23 November 2016 Source:  Office of the Minister of Conservation

“This is the first eradication of an unwanted butterfly population in the world and is another impressive example of New Zealand’s innovation and skill in removing pests,” Ms Barry says.

“They were first seen in Nelson in 2010 and the DOC-led joint agency eradication effort ran for three and a half years. It’s now been two years since any have been seen, and we’re confident we can declare them eradicated,” Mr Guy says. 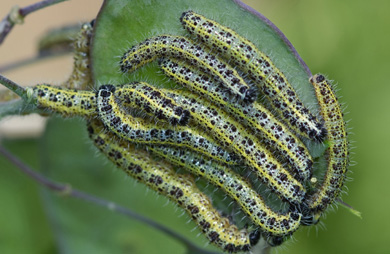 Community involvement in the eradication effort has been crucial to its success.

“A $10 bounty for dead butterflies was a powerful incentive during the spring school holidays in 2013, with children netting 134 of them,” Ms Barry says.

“Another innovation was the use of a modified garden ornament to attract butterflies to be caught in a net.”

DOC rangers carried out more than 263,000 searches of around 29,000 properties in the region for the butterfly and its eggs, caterpillars and pupae.

“People also kept watch for the butterflies, reported finds and allowed repeated searches of their gardens – all in all, without the help of the people of Nelson the butterfly may well have eventually spread across the country,” Mr Guy says.

The great white butterfly is a major pest of brassica crops. Caterpillars feed voraciously in groups, rapidly reducing host plants to a skeleton.

First seen in Nelson in 2010, it is a strong flier and would have spread through New Zealand, posing a major threat to 79 native cress species, especially the 57 at risk of extinction. It would also have ravaged commercial crops and home gardens.

An independent assessment for DOC estimated widespread butterfly infestation could cost the country $43 million to $133 million a year in control costs.

In November 2016, the great white butterfly was determined to be successfully eradicated and is no longer in New Zealand.