DOC and leading civil engineering company Fulton Hogan have confirmed a $1 million partnership that will see critically endangered takahē continue to make strong progress back from the brink.

“The more we learnt about the Takahē Recovery Programme and worked together with DOC and Ngāi Tahu, the more we realised we had a shared interest in a sustainable and multi-generational future for New Zealand,” says Bob Fulton. 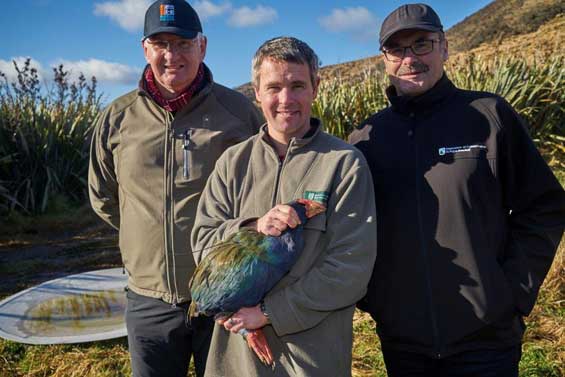 “This is a great opportunity for our people to help save a precious New Zealand species. Fulton Hogan takes a long-term outlook and is delighted to be helping preserve New Zealand’s natural heritage. We see this as an excellent example of industry working with iwi and government to deliver a world class conservation project.”

Fulton Hogan is taking over the reins from Mitre 10 as major partner for the programme. However, Mitre 10 is committed to continuing their support for Takahē Recovery and will become the programme’s official supplier with an annual donation of materials.

“It’s an exciting time for Takahē Recovery. The partnership with Fulton Hogan enables us to greatly build on the programme’s success and look to attain new goals for the recovery of this iconic species,” says Lou Sanson.

“The fight to save takahē is a team effort. With strong and ongoing support from our Treaty partner Ngāi Tahu and the help of Mitre 10 over the last decade, we’ve taken great strides in recent years.”

Found only in New Zealand, takahē are a taonga species with a population of around 280 birds. Currently confined to just one wild population in Fiordland’s Murchison Mountains, the colourful, flightless takahē were once found across the South Island.

The programme’s focus over the last few years has been on securing takahē from extinction by expanding the population on safe, predator-controlled mainland and island sites across New Zealand. The next step for the Takahē Recovery Programme is to re-establish wild populations in South Island high tussock lands, the natural home of the takahē.

“Since 2006 our breeding success at safe sites has risen from 17 birds per season to almost 40 juveniles this year,” says Lou Sanson.

“Fulton Hogan’s commitment enables the programme to tackle the next big challenge for the recovery of the species – identifying an ideal site to establish a new, large wild population of takahē.”

Watch a video about the partnership on Newshub. Includes an inteview with Joan Watson, 90, who was in the party that re-discovered the takahē in Fiordland's Murchison mountains in 1948.