The first chick of the 2015/16 breeding season for the Northern Royal Albatross Colony at Taiaroa Head/Pukekura on Otago Peninsula was welcomed late yesterday.

Summer heat during January and February is expected to be a challenge for the nesting adults and young chicks as overheating and fly strike can cause mortality.

Mayor of Dunedin, Dave Cull, says "the City is thrilled to welcome 2016's first Royal Albatross chick. It's so important to us, as the wildlife capital of New Zealand, to support conservation of the world's only mainland Royal Albatross breeding colony. As well as the benefits for the endangered albatross population, they are a great symbol for the city, and Dunedin is fortunate to host such good breeding colonies of many wildlife species". 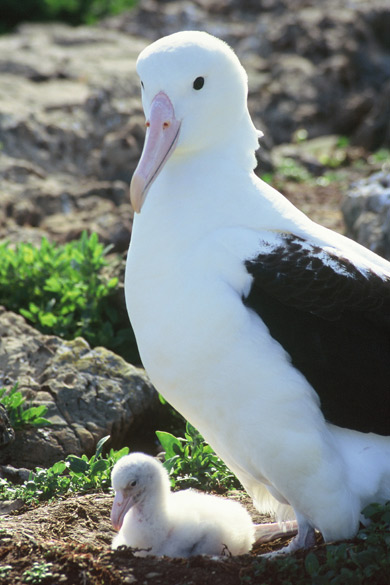 Otago Peninsula Trust General Manager Robyn McDonald comments "this is a great time to visit the colony as there are several nests within view of our exclusive viewing observatory on the nature reserve. The chicks are eagerly awaited by all our team who love the birds; our team enjoys sharing the exhilaration of seeing awesome albatross with visitors who come from around the world to see our unique site".

"Of course, there are concerns about the forecast hot summer and the effect it has on albatross chicks. The Trust, which runs the Royal Albatross Centre, works closely with DOC which manages the albatross colony reserve. All the extra work involved with looking after albatross in hot weather also puts pressure on the Trust. So the Trust has set up a Givealittle fundraiser to help with extra costs such as trucking in water for the colony's sprinkler system to keep albatross and chicks cool on blistering hot days."

DOC Coastal Otago Operations Manager, Annie Wallace, says "We are pleased to welcome the first chick this year. This is likely to be a particularly challenging season given the El Nino conditions we are experiencing. The lower rainfall and higher temperatures increase the likelihood of birds overheating on the nest. We appreciate the help of Otago Peninsula Trust who have been committed partners for many years," she said.

DOC rangers have long hours ahead in the next few weeks, checking the chicks several times a day to ensure they avoid fly strike and are adequately fed during the critical first 48 hours after cracking the shell.

Endangered Northern Royal Albatross have been successfully breeding at Pukekura since 1938, when the first chick was fledged. This season, 30 nests are dotted around the nature reserve. 29 of these nests are fertile with one couple nurturing a foster egg.

The 30th nest has been provided with a dummy egg to give the parents practice at nesting and to provide a back-up if a nest fails. The 2014/15 breeding season was the second most successful season on record, with 26 chicks raised. The colony is home to around 220 albatrosses whom, once mature, breed every two years.

125 albatrosses have been spotted this season since September with five birds returning for the first time. The five newly returning birds will not have touched land for over five years until their return to Pukekura for breeding. This season they are seen displaying adolescent behaviours including partying, courting, display flying with a few hijinks thrown in.

Pukekura albatrosses are unique in that their colony is the only place in the world where a mainland breeding colony can be viewed. The Northern Royal Albatross is a taonga species, valued and admired by all locals and visitors.

Chicks are unable to leave the nest. During periods of high temperatures, the adult birds and chicks can suffer from overheating and "fly blow or strike". This is an El Nino year, which can result in lower rainfall and higher temperatures during the summer months. Because of this, albatross chicks are likely to experience overheating while on the nest during the summer period.

To help mitigate the effects of overheating, irrigation spray nozzles are directed at the nests to provide cooling, and $5000 is needed to assist with extra costs. You can help by donating to the Otago Peninsula Trust's Givealittle campaign.