The first stage of a record breeding season for the kākāpō has come to a close, with the last egg of the year hatching this morning.

Date:  08 April 2016 Source:  Office of the Minister of Conservation

"Zephyr 2, hatched on Whenua Hou/Codfish Island shortly before 7am today, is the 46th chick this year – which makes this the most successful breeding season in the 25-year history of DOC's Kākāpō Recovery Programme."

The kākāpō, found nowhere else on Earth, is a world-famous native species which has become a standard bearer for New Zealand conservation. With only 123 adult birds remaining, their protection is a key priority for DOC. 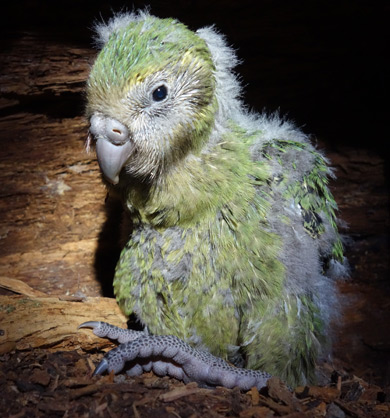 Dusky, a male kākāpō chick that hatched earlier this season

"New Zealand owes the rangers and volunteers who have worked tirelessly through the season to date a vote of thanks. They are giving this special bird species the best possible chance of survival."

Currently, 38 of the chicks are alive and well, although the coming weeks will be crucial as young kākāpō are extremely vulnerable and some may not survive into adulthood.

They will be checked and weighed regularly until they fledge at around 10 weeks old. If they are not thriving in the wild, they will be brought in for hand-rearing.

"It will be six months until the chicks are added to the head-count of the total kākāpō population," Ms Barry says.

"The flash-flood on Anchor Island last month which killed three chicks underlines just how precarious their lives can be – but we know that the Recovery Programme team is doing everything it can to ensure as many reach adulthood as possible."

This year is the first time breeding has occurred on all three kākāpō islands at the same time – Codfish and Anchor Islands in Southland and Little Barrier Island in the Hauraki Gulf.

There were also a significant number of first time breeders, both male and female, and the first successful breeding on Anchor Island in the decade that birds have been present there.

Kākāpō are notoriously picky breeders, only reproducing every 2-4 years, depending on the availability of fruit from trees such as rimu and beech, their primary food source.

2016 may become the most successful kākāpō breeding in the history of the species recovery programme, Conservation Minister Maggie Barry says.

The first kākāpō chick of 2016 has hatched on Anchor Island in Dusky Sound, Fiordland.