Introduced wasps are firmly in our sights this summer, as we expand our wasp control operations using the new wasp bait Vespex.

Vespex is a protein bait targeted only at wasps and is not attractive to bees. It was successfully piloted at five public conservation land sites in the South Island last year, reducing wasp activity at those sites by more than 95%.

DOC Scientist Eric Edwards says this year the Department will be using Vespex in priority areas where wasps are a threat to our native wildlife or present a high nuisance factor. 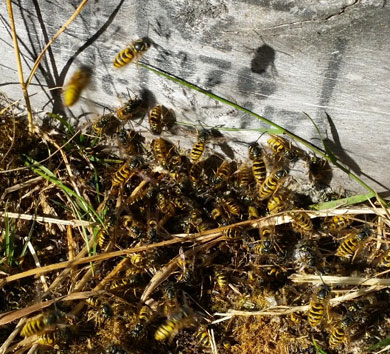 In the next few weeks DOC and its partners plan to bait wasps over 7,000 hectares at more than 30 sites. This includes new sites in Auckland, the Bay of Plenty, the East Coast of the North Island and Whanganui.

In the South Island wasps will again be controlled at sites in the Nelson Lakes area, Pelorus Bridge and the Marlborough Sounds, and in the Abel Tasman National Park.

Eric Edwards says previously DOC staff could only respond to the wasp threat by locating and destroying individual nests, which was dangerous and time consuming.

"This bait station method means that the wasps can be controlled over a wider area because they take the insecticide back to their nests to feed their larvae. Many nests can be destroyed from a single bait station," Edwards says.

One of the larger projects will be undertaken along 46 kilometres of the Abel Tasman Coast Track, in conjunction with Project Janszoon and the Abel Tasman Foreshore Scenic Reserve Fund.

"Bait stations are being placed near picnic areas and along tracks and huts to reduce the nuisance factor of wasps," says Edwards. "Working together in this way means that birds, insects and people can get some relief from pest wasps. We hope this partnership approach can be adopted elsewhere in New Zealand."

Vespex was developed by Nelson based consultancy Merchento in conjunction with DOC, and was recently made available for public use.

Eric Edwards says he expects wasp control to increase over the coming years now that councils, community groups and individuals can also access the bait.

Wasps are one of the most damaging insect pests in New Zealand. Edwards says their numbers can build up again each summer, so it's important that Crown agencies and universities join the fight researching how to remove them in the long term.