Drones are a real risk to wildlife with drone activity increasing at the Northern royal albatross colony at Pukekura/Taiaroa Head.

Managers of the Northern royal albatross colony at Pukekura/Taiaroa Head on Otago Peninsula are concerned about drones being flown over the colony.

Te Poari a Pukekura (the Pukekura Co-management Trust), the Department of Conservation (DOC) and the Otago Peninsula Trust (OPT) are worried this activity has been increasing in the past year, with locals and tourists operating drones from various points.

"This is a real risk to all the iconic and threatened species of wildlife on the headland," DOC Coastal Otago operations manager Annie Wallace said. 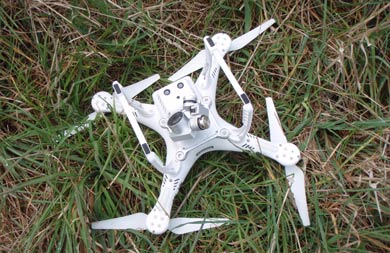 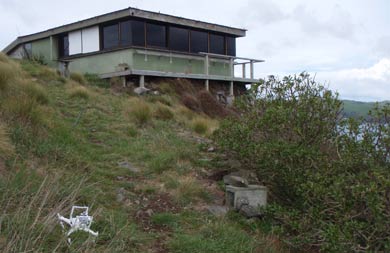 The drone crashed outside the observatory

There have been two incidents involving drones in the area in the past week. A crashed drone was found within the colony last week by DOC ranger Lyndon Perriman. The drone is a white and silver DJI phantom 3 advanced model and is undamaged.

Yesterday, Mr Perriman spoke to the owner of a drone being flown around the carpark beside the Albatross Centre. The OPT have erected temporary signs in the carpark saying drones are not allowed in the area. Permanent signs will be erected soon.

Ms Wallace said all aircraft including drones are restricted from using the airspace above the Pukekura/Taiaroa Head albatross colony as they can disturb wildlife and are a hazard for visitors. The colony is a nature reserve, and any public entry is by permit only.

Recreational and commercial use of drones on or over public conservation land and waters requires authorisation from DOC. Drone operators are also required to abide by Civil Aviation rules, including not operating in restricted airspace such as that above the Pukekura/Taiaroa Head colony.

All commercial use of unmanned aircraft including Remotely Piloted Aircraft Systems (RPAS) or drones over conservation lands and waters requires a concession from DOC. Recreational use requires either a concession or authorisation from DOC. You can check with the local DOC office to see which applies to you.

The concession/authorisation process enables DOC to monitor and manage the effects of activities on public conservation lands and waters. For unmanned aircraft, some of the effects that are often raised as potential concerns are:

The penalties for operating a drone above the colony without a permit range from 1 year's imprisonment to 2 years' imprisonment, and/or a fine up to $100,000. The drone could also be seized.