A pair of New Zealand’s rarest birds has been sighted on the West Coast and DOC staff are asking the public to report further sightings. 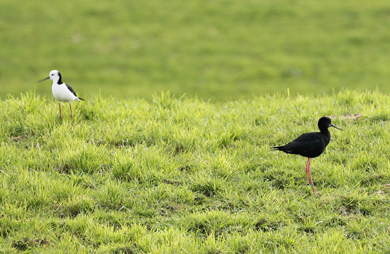 One of the pair of black stilt/kakī that were recently sighted – the left bird is the more common pied stilt
Image: DOC

The two kakī were spotted by a farmer on a dairy farm in the Arahura Valley. The farmer suspected they were rare and reported the sighting to DOC, who confirmed the birds were black stilt/kakī.

Kakī are critically endangered, with less than 100 adult birds in the wild. Once common throughout New Zealand, kakī are now found on the braided rivers and wetlands of the Mackenzie Basin, South Canterbury. DOC runs a captive breeding programme in Twizel, working in partnership with the Isaac Conservation and Wildlife Trust in Christchurch.

Eggs are collected from both captive and wild pairs, they are artificially incubated and the chicks hand-reared for release into the wild in order to grow the wild population.

Staff were able to identify the birds from their leg bands. The birds, who were raised in adjacent aviaries, both hatched during the summer of 2014/2015 and were last seen in the Tasman Valley, in early January, the day after they were released.

The birds have moved on from the farm, but have been sighted flying in the area.

Kakī Ranger Liz Brown says this is the first sighting of kakī on the West Coast since records began in 1979.

“It's pretty neat to see where they ended up. After they disappeared, we thought the worst. We supplementary feed newly released birds for around six weeks post release, but happily, these two sussed out how to fend for themselves without our help”.

Although the sex of the pair is unknown, there is a possibility they may be a breeding pair. Any sightings of the birds can be sent to lbrown@doc.govt.nz.

The main threats to kakī include:

Kakī have been intensively managed since 1981, when their population declined to a low of just 23 birds. DOC’s captive breeding centre, near the town of Twizel in the Mackenzie Basin, plays an important role in the Kakī Recovery Programme.

A number of kakī pairs are held at the centre for captive breeding. All kakī eggs are artificially incubated and the young chicks are raised in captivity. At 2-9 months they are released into the wild. Rearing them in captivity significantly increases their chances of survival by preventing predation when they are most vulnerable (as chicks and eggs).

Conservation efforts to date have succeeded in averting extinction and increasing kakī numbers. By 2016, kakī numbers in the wild had increased to 91 adults.

Kakī, or black stilt, is a native wading bird only found in New Zealand. It is regarded by Māori as a taonga species – a living treasure.