The rare white humpback whale spotted in Cook Strait in July last year has been confirmed as a Migaloo, the first found in New Zealand waters. 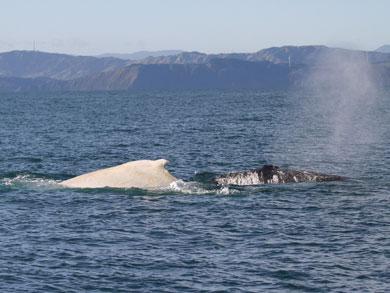 A white humpback whale spotted in Cook Strait last winter has been confirmed as Migaloo, a famous white whale usually seen off Australia.

The white humpback whale was seen on 5 July by researchers on the annual Cook Strait Whale Survey, a partnership between the Department of Conservation and OMV New Zealand.

DNA analysis by Oregon State University in the United States of a skin sample taken from the white whale by the survey team has found it matches the genetic profile taken from Migaloo off Australia, confirming it is the same whale.

The Cook Strait sighting was the first of Migaloo in New Zealand waters and outside of Australian waters. At the time, Cook Strait Whale Survey leader Nadine Bott said distinctive features on the white whale, including its dorsal fin, strongly indicated it was Migaloo.

“I was confident it was Migaloo but it’s good to have it supported by DNA results which give us 99.99% certainty it was him,” said Nadine Bott.

“Migaloo being in New Zealand waters supports the findings from our Cook Strait research that humpbacks seen off eastern Australia also move through our waters and perhaps even more so than we had thought. This has been indicated particularly by matches of photos of humpback whales seen during our survey with photos of humpbacks off eastern Australia.

“My thanks go to Oregon State University for undertaking the DNA analysis and Auckland University for assisting in getting the skin sample to the United States. Confirming it is Migaloo helps us in learning more about humpbacks in South Pacific waters.”

Migaloo - Aboriginal for ‘white fella’ – was first seen off eastern Australia in 1991 and has been seen there almost every year since.

White humpbacks are extremely rare with only four reported in the world. Migaloo is the most famous and is thought to have fathered two white calves which have been making appearances along Australia’s eastern coast. One has been named MJ, short for Migaloo junior. Another white humpback whale was spotted in Norway last year.

The annual Cook Strait Whale Survey is assessing humpback whale recovery since commercial whaling ended in 1964 and has run for 12 years. Last year’s four-week survey counted a record 137 humpback whales which is an encouraging indication their numbers are increasing in New Zealand.

The yellow markings on the photos of Migaloo in Cook Strait are marine algae which attaches in the colder waters of Antarctica but comes off as the whales move into warmer waters.