A 3 year research project has begun to learn more about blue whales feeding in the South Taranaki Bight off the Taranaki coast. 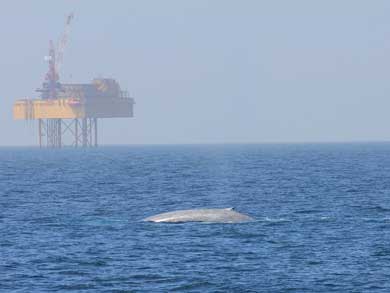 An international research team, working in collaboration with the Department of Conservation (DOC), has begun work on an extended survey to learn more about blue whales feeding in the South Taranaki Bight off the Taranaki coast.

The research covers an area of the Tasman Sea between Cape Egmont and Farewell Spit and is led by Oregon State University marine mammal expert Dr Leigh Torres.

The research, led by Oregon State University, will be conducted over a three year period with support from the Aotearoa Foundation, a private foundation, in collaboration with DOC.

Blue whales are the world’s largest animal. Sightings are rare as they normally travel alone or in pairs and are quite elusive. There are just four confirmed blue whale foraging grounds in the Southern Hemisphere, outside of Antarctic waters.

It was thought that blue whales were only passing through New Zealand waters while migrating. But two years ago Dr Torres led a team of researchers that observed dozens of blue whales feeding about 100km off the coast south of New Plymouth.

Funding has now been secured for Dr Torres to return to the South Taranaki Bight. She’s leading a research team - that includes two DOC marine specialists - working to determine the significance of the area as a foraging ground for blue whales.

“We want to know when and where the blue whales occur in the South Taranaki Bight, as well as how many blue whales use this area as a foraging ground. We also hope to understand how long they stay in the area or come back regularly to feed there. This information will help us protect the whales and their habitat,” says Dr Torres.

“We will also collect information about the blue whales off the Taranaki coast, such as what population these whales belong to and if the population is growing, shrinking or staying the same.”

The initial work on board the NIWA research vessel Ikatere has begun and continues until late February.

The researchers will be deploying hydrophones in the water to record blue whale calls for the next two years. This will help them map the movement patterns of the whales. They will be photographing whales so they can continue identifying individuals. They’ll also be taking very small tissue samples from each whale. Genetic and stable isotope analysis of these tissue samples will provide key information about the blue whale population in the South Taranaki Bight.

The blue whale is the largest animal in the world. There are two sub-species of blue whales in the Southern Hemisphere, the Antarctic (or true) blue whale and the pygmy blue whale.