Brazilian beetles have been released into the wild in Wellington’s town belt to help control the pernicious weed tradescantia, or wandering willie.

Date:  03 March 2016 Source:  Office of the Minister of Conservation

Conservation Minister Maggie Barry and Wellington Mayor Celia Wade-Brown today released tradescantia leaf beetles on Mt Victoria as part of an ongoing biocontrol project targeting the weed, which is a major problem in the capital city.

“Tradescantia is one of our Dirty Dozen weeds for 2016,” Ms Barry says. “It’s an invasive, hard-to-kill weed, originally from South America, which forms a dense, thick carpet on the ground, smothering other plants and preventing native species from establishing themselves. It’s also an unpleasant species for dogs, who often suffer from allergic reactions after touching it.”

The weed is difficult to manage as it breaks into many pieces when pulled, with almost every piece of stem capable of sprouting again. It is so widespread across New Zealand chemical control is not feasible. 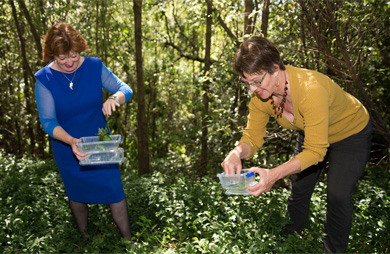 A team of Landcare Research scientists funded by the National Biocontrol Collective imported three species of tradescantia beetle from Brazil to investigate their use as a method of control.

Each of the three species of beetle attacks a different part of the plant – the leaves, stems and tips. The leaf beetles being released today are 4-5mm long, dark bronze in colour and able to fly.

“Landcare Research thoroughly investigated the beetles and they’ve been shown to pose no threat to any other species – the only thing they eat is tradescantia,” Ms Barry says.

The Wellington Botanic Gardens has been used as a captive breeding site for the beetles since 2014, with considerable success.

“Using the beetles reduces the need for chemicals and it’s to the Wellington City Council’s credit that they’ve seen the potential of this project,” Ms Barry says.

“Today is the first time the beetles grown at the Botanic Gardens will be released in the wild, and their progress will be monitored – it’s expected that by damaging the tradescantia there will be more room for native plants to flourish, helping us win our War on Weeds.”

Tradescantia beetles have already been released in Auckland, the Bay of Plenty, Waikato, Northland, Taranaki, Hawkes Bay, Manawatu-Wanganui, Tasman, Marlborough, the West Coast and Canterbury. Some early results have been impressive.

“Biocontrol, done responsibly, is an exciting area of science which promises to be a significant benefit for our natural world,” Ms Barry says. “I congratulate everyone involved in the tradescantia beetle project and look forward to seeing its results.”