Bats and birds get a boost from pest control

Numbers of endangered bats and birds are up in the Kepler area of Fiordland National Park after aerial predator control this spring, recent monitoring has shown.

Following widespread beech seeding across Fiordland earlier this year and increasing rat numbers, DOC treated a 20,000 ha area of the Kepler Mountains with biodegradable 1080 as part of the Battle for Our Birds programme.

Monitoring of long-tailed bats in the Iris Burn valley of the Kepler Mountains this month recorded 57 female bats, up from 43 in 2015 and 32 in 2013 when the rare bat was first monitored at this site.

A whio/blue duck survey showed that duckling numbers in the Iris Burn had almost doubled from 16 in 2014 to 30 this year.

DOC Operations Manager for Fiordland, Greg Lind, said it was rewarding to see wildlife responding after the knock-down of rats, stoats and possums.

“It’s a great result to be seeing the steady increase of some of our rarest species such as long-tailed bats and whio.” 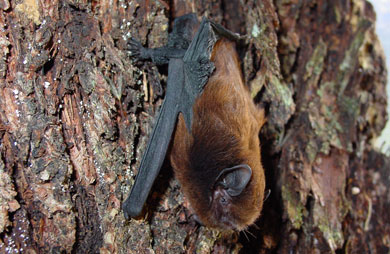 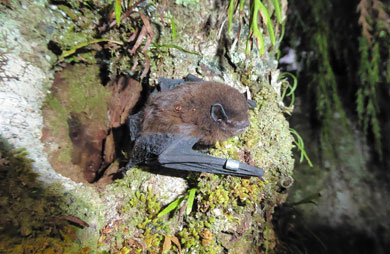 A rat tracking rate of more than 20% during the spring threatens rat-vulnerable forest bird species and bats that are breeding and raising young then.

Prior to 2010, rats and possums were controlled over less than 0.5% of Fiordland National Park. DOC’s Battle for Our Birds campaign saw this increase to 7% in 2014 and to 8.5% in 2016.  Fiordland sites under the programme included the Waitutu forest, Clinton valley, Arthur valley, Eglinton valley and areas of the Kepler Mountains.

This year’s Battle for our Birds programme will cover more than 800,000 ha across New Zealand to protect our most vulnerable populations of native species. Use of 1080 applied by air is backed up by ground control using methods like traps and bait stations over a further 70,000 hectares.

The Kepler Mountains are home to many threatened species that benefit from possum, rat, and stoat control, including mohua, kākā, kea, whio/blue duck, Fiordland tokoeka and one species of native bat.

In 2010 nationally endangered long tailed bats were detected in the Iris Burn valley of the Kepler mountains. Bats are extremely vulnerable to predation from rats and stoats and, with no successful methods currently established to move populations to safer areas, protecting established roost sites is vital.

Aerial 1080 operations were carried out in the Iris Burn in response to the 2014 and 2016 beech masts. In 2013, the monitoring team recorded 32 female bats, and in 2014, 35. This increased to 43 females in 2015, and 57 in 2016. Monitoring female bats gives the best indication of the health of the population and nearly all females recorded this year were lactating, a good indication of there being baby bats at roost sites.

Whio river surveys in the Iris Burn have also shown a response to predator control carried out in the area, with numbers of ducklings increasing from 16 in 2014, to 20 in 2015, and 30 in 2016. Whio are vulnerable to stoat predation at all stages of life, so monitoring the species provides a good indication of the effectiveness of stoat management in an area.

Long-tailed bat are widely distributed throughout the mainland and on several offshore islands.