Two offenders who stole ponga from public conservation land have been sentenced to a total of 460 hours of community work.

Two offenders have been sentenced to a total of 460 hours of community work for stealing ponga from public conservation land.

The duo were caught in the act by Department of Conservation (DOC) compliance officers who seized the logs along with a trailer and chainsaw being used as part of the illegal activity. McCollum also pleaded guilty to a charge of giving false details to the compliance officers.

The prosecution is the result of ongoing surveillance of conservation areas and vigilance of the community.

“The sentencing illustrates how DOC is working with the wider community to address this illegal activity and sends a clear message that we will prosecute” explains DOC solicitor Mike Bodie.

Surveillance by Rotorua DOC staff has previously led to the successful prosecution for the theft of commercially sold firewood from conservation land.

“Removal of native vegetation impacts on the conservation values of public conservation land. Vegetation has important ecological value and any attempts to remove it will be taken seriously.”

The public and landscaping or firewood merchants are urged to check the source of any ponga or firewood they are purchasing to be sure it is from a legitimate source on private land. It is an offence to remove or knowingly receive any vegetation from public conservation land.

The maximum sentence for the offence is two years' imprisonment and a $100,000 fine, and offenders risk forfeiture of vehicles, trailers and equipment. DOC urges anyone who sees suspicious activity around local reserves or conservation areas to immediately call the toll free number 0800 DOCHOT (362 468).

The Department will continue to monitor sites and individuals for signs of illegal activity. 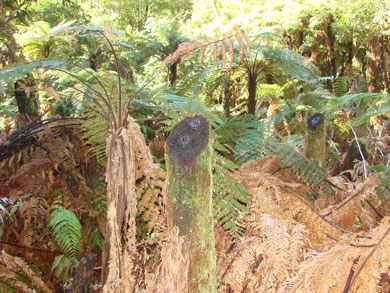 Ponga stumps cut in Rotoehu Conservation Area by the offenders 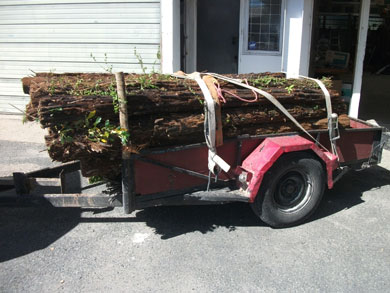 Trailer and 54 ponga logs seized by the Department of Conservation