Several pilot whales/ūpokohue which stranded at Doughboy Bay on Stewart Island/Rakiura this week had to be euthanised by DOC staff to minimise their suffering. 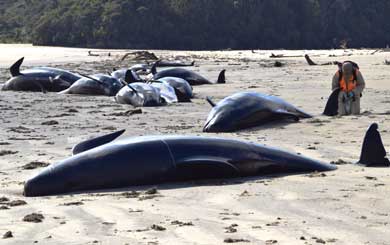 A pod of 29 pilot whales stranded at Doughboy Bay were discovered on Tuesday evening by two trampers. The pair, who had tramped into Doughboy Bay hut on the west coast of the island, found the pod of dead and dying whales. It was two days before they could raise the alarm via water taxi operator Matt Atkins.

Two DOC staff immediately flew to Doughboy Bay to assess the situation.  Once there, they found the whales stranded the length of the beach at low tide.

“Eight of the whales were still alive when we arrived,” said Stewart Island ranger Phred Dobbins.

“However, refloating them was not an option given the length of time they had been stranded in hot, dry conditions. With the tide well out, we saw little hope of keeping the animals alive until enough rescuers could be flown in to assist,” he said.

Mr Dobbins added the decision was made to euthanise eight whales.

“Euthanasia is a difficult decision but is made purely for the welfare of the animals involved, to prevent them from prolonged suffering.”

The whales will be left to decompose naturally on the beach, due to the remoteness of the site. Visitors should stay well clear of the carcases and avoid swimming in the area.

“We’re extremely thankful to the trampers who reported this incident” Mr. Dobbins said.

The public are the eyes and ears of DOC, and DOC encourages anyone to report conservation emergencies, especially whale strandings and fires, by calling the DOC hotline, 0800 DOC HOT (0800 362 468).

Under the Marine Mammals Protection Act 1978 it is illegal to take any part of a marine mammal without a permit to do so. Taking of marine mammals or parts (alive or dead) without proper authorisation could incur a penalty of up to 6 months imprisonment or a fine up to $250,000.

Fifty one species of marine mammal have been recorded in New Zealand waters (9 seals, 42 whale, dolphin or porpoise). This equates to about 60% of the species known to science worldwide. New Zealand is often referred to as the marine mammal capital of the world for this reason.

How you can help at a stranding:

The largest mass stranding on record happened in 1918 when 1000 whales stranded on the Chatham Islands.

The most recent stranding on Stewart Island happening in June 2013 when one pilot whale stranded on Maori Beach.

Whales are the world's largest mammals. Almost half the world’s whale and dolphin species are found in New Zealand.

Find out why whales and dolphin strand, the stages involved in a stranding response, and how you can help.