We can expect record numbers of visitors on Rotorua tracks this summer, and many will also be volunteers helping to maintain these tracks.

The latest statistics gathered from track counters suggest record numbers of visitors will make use of Rotorua's walking and hiking tracks this summer. Many tracks have already shown an increase in the number of users from 2014.

The Department of Conservation uses electronic track counters to record the number of users on some of their tracks.

"Nearly 45,000 visitors have been counted on our Okere Falls track during the past year" explains Recreation Ranger Dean Strachen. "We've already recorded nearly 1,000 more interactions than the same time last year and I wouldn't be surprised if we record visitor numbers of around 7,500 for the month of January 2016."

"There's a significant increase in the number of people enjoying the Tarawera Trail from last November too. More than 15,000 people have visited here in the past 12 months including 2083 in November 2015. This is likely to be a result of the Tarawera Marathon."

Marathon Organiser, Paul Charteris says that over the past few months many large groups of runners have been traveling to the region to train on the Tarawera Trail in preparation for the race held in mid November. The media coverage following the event has boosted the profile of the Tarawera Trail, both at home and abroad.

"A further benefit of events like the marathon is the volunteer work that the runners put in with upkeep of these tracks. Charteris estimates their runners will contribute around 700 hours of volunteer work on the five different Rotorua-area DOC tracks this summer" explains Paul. 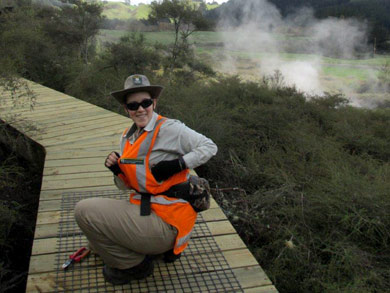 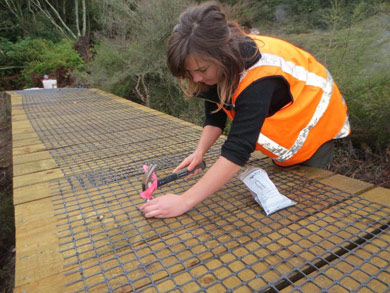 The Rotorua DOC office currently employs two permanent Recreation Rangers. Together with support from community groups like the Mount Ngongotaha Bush Restoration Trust, the team maintains 40 tracks and six campgrounds to meet departmental standards. Details on these facilities are available on this website, or from the Visitor Centre Ranger at the DOC information desk of the Rotorua iSite.

Starting in January 2016, DOC is starting a volunteer programme which provides an opportunity to experience life as a Recreation Ranger. Volunteer Wednesday kicks off on January 27 with a trip to Mokaihaha Ecological Area. People of suitable fitness are encouraged to email rotorua@doc.govt.nz for further details.

This reserve has significant Maori cultural and spiritual value and features the waterfalls of the Kaituna River, including the highest commercially rafted waterfall in the world.

Plants in the Lake Tarawera Scenic Reserve have regenerated since the 1886 Mount Tarawera eruption which dramatically changed the landscape around the volcano.

Volunteer in the Bay of Plenty

Get involved in DOC volunteer activities in the Bay of Plenty.