A Department of Conservation ranger checking a male kiwi’s transmitter at Pukaha Mount Bruce last week found not one but two newly hatched white kiwi asleep in a burrow.

A Department of Conservation ranger checking a male kiwi’s transmitter at Pukaha Mount Bruce last week found not one but two newly hatched white kiwi asleep in a burrow.

This brings the number of white North Island Brown kiwi to be hatched at the National Wildlife Centre, located 15 minutes drive north of Masterton, since 2010 to five.

“The burrow the white kiwi chicks were found in belongs to the father of the three other white kiwi previously hatched at Pukaha,” says Helen Tickner, general manager Pukaha Mount Bruce.

“Statistically we know that there is a one-in-four chance that chicks produced by the pair will be white, and as kiwi partnerships have been known to last for decades it’s not completely unexpected. But it still feels like we’ve won the lottery! It’s a great feeling for everyone involved”. 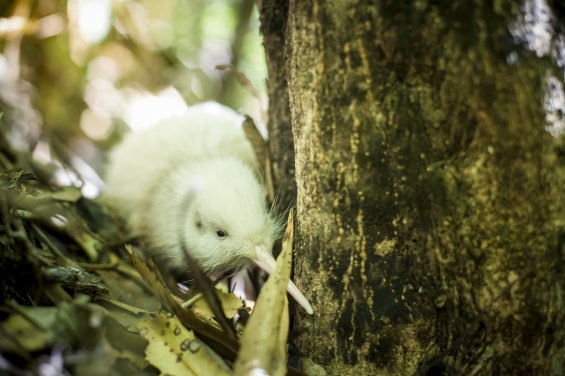 The kiwi chicks were given a health check by Department of Conservation and Pukaha staff who confirmed the pair were in good health. The chicks have started to feed by themselves and the decision was made that they would remain in the reserve rather than be brought into the nursery.

Mrs Tickner says having kiwi hatch and survive in the wild is a great indication that the thousands of dollars each year spent on predator control in the reserve is paying off.  “Any kiwi chick hatching at Pukaha is a truly special occasion, but the white kiwi are currently unique to Pukaha and are a special treat for visitors,” she says. “Our first white kiwi to hatch at Pukaha, Manukura, is living in our nocturnal house and visitors can see her every day”

Staff will regularly check the two chicks as their transmitters need to be re-sized regularly as they grow.