Once again temperatures increased this afternoon as fire crews continued to work to ‘black out’ around the edge of the fire area at Flock Hill and control flare ups in hot conditions today.

Once again temperatures increased this afternoon as fire crews continued to work to ‘black out’ around the edge of the fire area at Flock Hill and control flare ups in hot conditions today.

DOC fire officer and Incident Controller Bruce Janes said with the cloud clearing early afternoon, air temperature increased to the predicted 24 degrees but ground temperatures got to reached 32 degrees, making for very hot work for the 45 fire fighters on the ground.

Janes said more than 65 percent of the 8-kilometer perimeter of the 330-hectare fire area had now been contained and damped down.

“Our focus today has again been on preventing the fire spreading any further and dousing flare ups and hot spots.”

Use of DOC’s thermal imaging camera this morning has provided the incident management team with invaluable data on where to concentrate their efforts over the next few days.

“We’re making slow but steady progress and based on this latest information we should be on track to complete most of the intense ground control work by Sunday, local crews should be able to monitor the fire next week.” 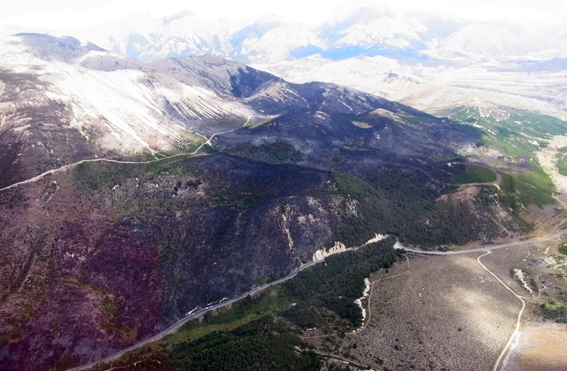 The fire area at Flock Hill

Fire crews are working up to 14-hour shifts to clear vegetation and fell trees around the fire boundary and have requested further supplies of hoses, pumps and hand tool, as well as some (any) rain.

Ground crews are supported by about 20 people at the Incident Management site as well as two helicopters bucketing water and shifting crew and equipment.

A fire crew will patrol SH 73 over night. Tomorrow ground fire crews would continue work on high risk areas and around the fire edge.

Meanwhile DOC’s investigation into the cause of the fire is still continuing with useful information provided by members of the public.