Te Anau Wildlife Centre is set to join the Department of Conservation’s kākā captive breeding programme after the resident birds have successfully reared chicks this summer.

In previous seasons the kākā, Charlie Brown and Bling, had attempted to breed but never managed to nest successfully. This season they successfully hatched their eggs and the three chicks have all been reared to adolescence.

A new breeding facility more suited to nesting and rearing chicks will be made for the kākā by modifying the current kea enclosure. 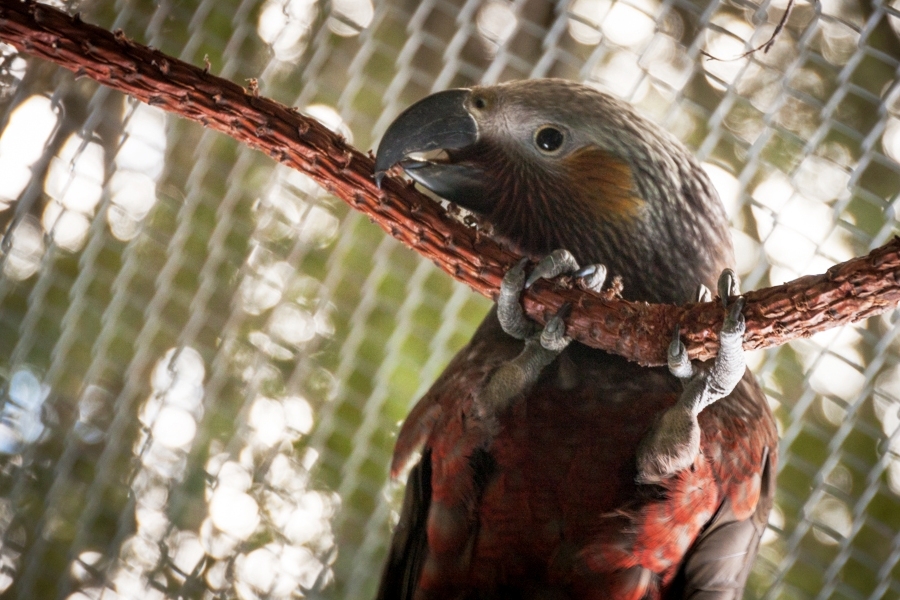 The chicks from the Te Anau Wildlife Centre will be released into Orokonui Eco-sanctuary, near Dunedin, once they are fully grown.

Andrew Smart, DOC biodiversity ranger, is excited that the kākā reared at the Wildlife Centre will be contributing to the conservation of their species.

"It is great to see the Centre’s kākā raising chicks that will boost newly established populations in areas where restoration work is being done."

While the Wildlife Centre has welcomed the arrival of the kākā chicks, they are now set to farewell another inhabitant, as the solitary female kea will soon be moving to a new home.

The Wildlife Centre does not meet DOC’s current standards for holding captive kea; the enclosure does not meet specifications and kea must not be kept alone. Kea are highly intelligent and social birds and need the stimulation provided by companions.

The kea will be moved to Wellington Zoo, for a period of quarantine, before joining captive kea, either at Willowbank Wildlife Reserve or Orana Wildlife Park near Christchurch.

When it was revealed last year that DOC was reviewing holding kea and kākā at the Wildlife Centre, the Te Anau community expressed concern about the possibility of these birds being moved.

"We appreciate the level of concern and feedback we have received about the Wildlife Centre’s future. This shows the level of passion and commitment Te Anau locals have for wildlife and conservation."

Four takahē also reside at the Te Anau Wildlife Centre and DOC is committed to maintaining this display population.

The Centre’s facilities are also used by the Pāteke Recovery Group for housing pāteke/brown teal breeding pairs, and periodically by the Whio Recovery Group to rear whio/blue duck ducklings.

Te Anau Wildlife Centre offers visitors the chance to get up close with some of New Zealand’s rarest native birds. A tour of the Centre is run each day and is highly popular. Over 3,500 people attend the tour every year and this is in addition to the many visitors who visit outside of the tour time.

The focus of DOC’s Kākā Captive Programme is to rear juvenile kākā for release into ecosystem recovery projects to establish self-sustaining populations. Once this has been achieved DOC’s South Island Kākā Captive Breeding Programme will end.

Display sites such as the Te Anau Wildlife Centre play an important role in Takahē Recovery by offering a home to retiring or non-breeding birds thus freeing up territory at secure sites, such as Burwood Bush, for more productive pairs of takahē.

It also gives both local, and overseas, visitors the chance to view these critically endangered birds

DOC is currently involved in a programme which breeds pāteke and releases them into the wild to establish new populations. Te Anau Wildlife Centre currently houses three breeding pāteke pairs.

The Te Anau Wildlife Centre is used as a captive rearing facility for juvenile whio in years when conditions are favourable to remove eggs from wild breeding pairs to rear in captivity.

Take a peek at some of Fiordland’s special birds that are difficult to see in the wild. A great family friendly place to visit.