Critically endangered takahē have a new retirement home in Wairakei Golf + Sanctuary thanks to work undertaken by its bird-loving owner, Gary Lane, to secure the site from predators. The Department of Conservation (DOC) will deliver takahē pair, Grant and Flotsom, to the sanctuary near Taupō just after midday today.

Through its 10-year partnership with Mitre 10 DOC has made significant progress in its Takahē Recovery Programme. With 40 chicks produced this year, the department has seen its best captive breeding season by far. 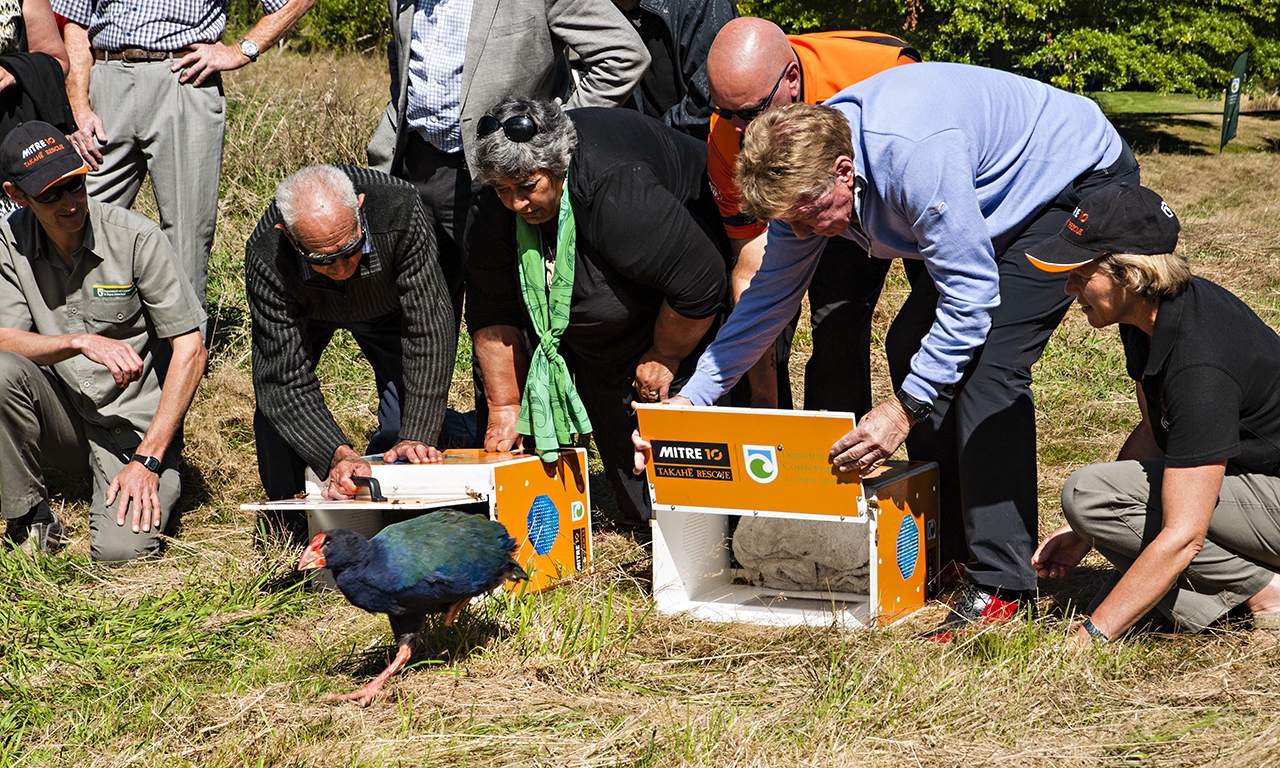 “This year’s incredibly successful breeding season has meant that we are under more pressure than ever to find safe homes for takahē away from the jaws of introduced predators, particularly stoats,” says DOC Takahē Ranger Phil Marsh.

“Thanks to Gary Lane’s vision of offering a haven for New Zealand’s rare birds and plants,  Wairakei provides non-productive takahē a safe place to live out their days without taking up vital breeding territory.”

Surrounded by a five-kilometre predator-proof fence, the course is also used as a kiwi creche for North Island brown kiwi.

“The predator proof fence, coupled with the development of wilderness areas, wetlands and extensive tree planting, has been embraced by the local community. Groups such as Greening Taupō and school students are following suit with tree planting and weed control,” explains Wairakei Ecological Manager Nigel Lloyd.

“The community involvement is very much part of the larger vision of the Wairakei, Taupō iwi and DOC partnership to support the conservation of New Zealand’s birdlife.”

Starting with a pōwhiri by iwi delivering and welcoming the birds, a release ceremony (including  Taupō primary and secondary students, Mitre 10 staff, DOC Director General Lou Sanson and Gary Lane) will celebrate the new partnership.

“Wairakei gamekeeper, Jeff Willis, will be trained in takahē management by DOC rangers this week. He will be keeping a close eye on the birds over the coming months,” says Nigel Lloyd.

The birds retiring to Wairakei, are two of six takahē being transferred from a secure breeding population on Mana Island this week. Four young takahē hatched on the island late in 2013 will be flying to Auckland courtesy of Air New Zealand. The young birds will be used to boost the breeding populations at Tawharanui Open Sanctuary and on Motutapu Island

Once presumed to be extinct, the takahē is one of only two of New Zealand’s iconic herbivorous ‘mega fauna’ to survive human contact; the other being the kākāpō.

In order to secure the future of the species, DOC has been working to increase the number of breeding pairs in secure (predator-free) islands and sanctuaries across New Zealand.

“In time it is hoped that more takahē will be retired to Wairakei,” says DOC Ranger, Phil Marsh.

Over the past ten years Mitre10 Takahē Rescue has contributed over 1 million dollars to takahē conservation, meeting many of the costs associated with increasing breeding capacity and managing the takahē meta-population.

Mitre 10 has also been helping promote the plight of the takahē at events, through competitions and at in store promotions.

Including the birds at Burwood, there are currently 60 breeding pairs of takahē at secure sites across NZ. These are spread across six islands (Tiritiri Matangi, Motutapu, Maud, Mana & Kapiti and one other) and three mainland sites (Maungatautari Ecological Island, Cape Sanctuary and Tawharanui Open Sanctuary).