Minister Maggie Barry attended the release of 10 takahē into the Murchison mountains, marking a very successful year for takahē recovery. 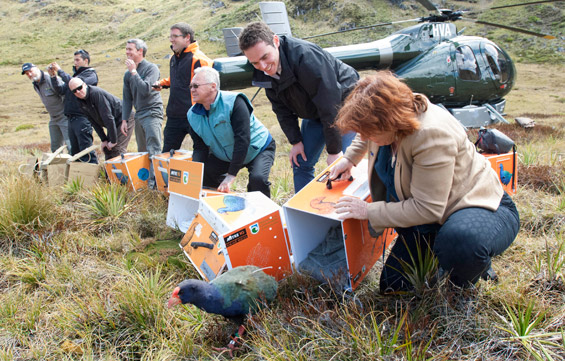 "This year has been a very successful one for takahe recovery, with 30 birds set to bolster the wild population in the Murchisons – the only place the species can still be seen in the wild," Ms Barry says. 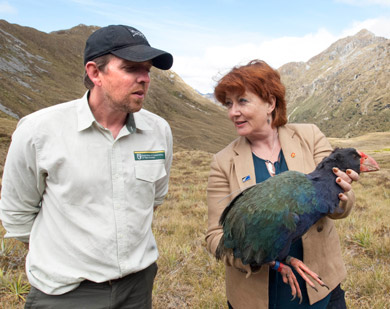 More takahē will be released over the next three years
Image: Barry Harcourt ©

Burwood Takahē Centre, near Te Anau, is a crucial part of the recovery programme, home to 22 breeding pairs whose offspring are helping to restock the Murchison population. This year has seen a record number of chicks hatched.

"The young birds we released were born at Burwood last year, and have spent the last two months assisting their parents raise this year’s chicks. This should give them critical skills for successful breeding when they are ready," Ms Barry says.

Takahē in the Murchison Mountains are intensively monitored and surrounded by a network of 3,500 traps covering more than 50,000 hectares.

More birds bred at Burwood will be added to the population over the next three years, bringing the area to 80 per cent of its carrying capacity of around 150 individuals.

"The next goal for the programme will be to establish a second secure site for a wild population," Ms Barry says.

"There are now 90 breeding pairs of takahe in New Zealand, 68 of them based on predator-free islands and in mainland sanctuaries. The future for a species once thought extinct is bright."