Return of jewelled geckos welcomed by Southern company and community

Setpoint Solutions is pleased to see the return of jewelled geckos to New Zealand after they were poached from Otago Peninsula over a year ago.

Two of the geckos were returned to New Zealand from Germany yesterday and are being quarantined at Wellington Zoo. They cannot be returned to the wild because they have been exposed to unknown biosecurity threats overseas. 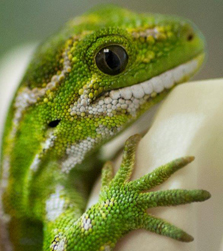 Since 2007, the Dunedin, Christchurch and Wellington-based company has been funding jewelled gecko conservation work by the Department of Conservation (DOC) and others in Otago and Canterbury to ensure the bright green native lizards with their striking markings have a secure future.

The geckos, which are only found in Otago and Canterbury, have been targeted by foreign poachers many times in recent years but Setpoint Solutions, DOC, the Otago Peninsula Community and Eco-Gecko consultant Carey Knox are working together to protect them. They are in decline due to a combination of habitat loss, predation from introduced mammals and poaching.

Setpoint Solutions Director Mike Hormann said it was great to see the geckos being brought back to New Zealand as a result of the hard work of many people and groups.

“We are happy to see that our input into this stunning and interesting gecko has helped the effort of protecting and increasing the knowledge base for these animals that have become part of our company culture,” Mike said.

“The repatriation of our precious local wildlife from overseas is a significant step to ensure it is safeguarded for our tamariki and mokopuna,” Edward said.

Eco-Gecko consultant Carey Knox said he was able to identify one of the geckos as coming from the Otago Peninsula based on a photograph he had taken of the gecko a few years before it was identified as being overseas.Jewelled geckos can be accurately identified as individuals based on the unique dorsal patterns that each jewelled gecko has. Every year they are monitored to keep track of the populations and photographs from this can potentially be used to identify stolen geckos.

Carey said he was glad to have played a role in the return of these geckos. “I hope it sends a message that these animals belong in New Zealand, preferably in the wild; however, since these two geckos cannot be returned to the wild, I hope that they can play an important educational role in captivity.”

All New Zealand geckos are fully protected under the Wildlife Act 1953, meaning that they can only be handled, collected, exported, or kept in captivity under permit. The export of wild geckos from New Zealand for trade on the overseas market without the proper authority is illegal, and jewelled geckos have never been legally exported from New Zealand.