DOC has completed the removal of Gardiner Hut which was deemed beyond repair after a significant rock avalanche in July 2014.

The remote hut, used only by experienced alpine climbers, was removed over two visits. The process involved DOC staff blasting a large rock that had caused most of the damage. The barrel-shaped hut was then cut into three pieces and flown out by The Helicopter Line. 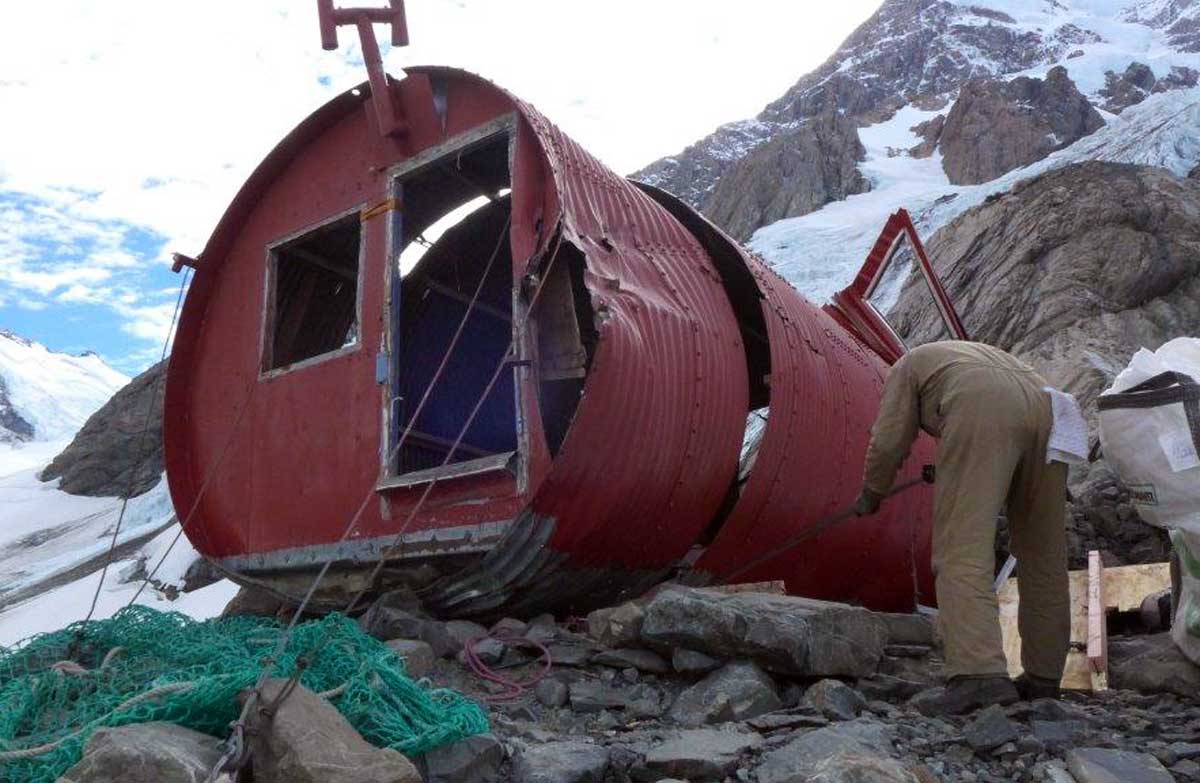 “This was a massive rock fall and it is testimony to the hut’s placement and design that the structure survived at all,” says DOC Aoraki Conservation Services Manager, Mike Davies. “The current loss of Gardiner Hut illustrates the challenge of building and maintaining huts in Aoraki’s dynamic geological landscape. This situation is further exacerbated by glacial recession.”

The rock avalanche occurred on the south face of Aoraki/Mt Cook, from below the Hillary Ridge immediately northwest of Endeavor Col. The avalanche damaged Gardiner Hut moving it off its foundations and destroying the adjacent toilet.

The hut has been closed since the avalanche pending a detailed onsite engineering assessment once the site became clear of snow. An assessment in March 2015 concluded that the hut was beyond repair and would need to be removed.

“The department will now work with the public and our partners towards a decision regarding the replacement of the hut,” says Mike Davies.

“This will link in to the review of the Park Management Plan later this year. It will need input from Ngāi Tahu in recognition of Aoraki’s cultural importance and its Tōpuni status, as well as the Conservation Board, and alpine users of the park.”

The rock avalanche also severely damaged the Pudding Rock Cables and anchors that provide critical access to Gardiner Hut and the upper Hooker Valley climbing routes on the western side of Aoraki. This includes a number of routes including the classic Grand Traverse, South Face of Hicks, La Perouse and Nazomi. The department plans to replace these cables next summer.

1894
Gardiner Bivvy known as the “Lower Cook Bivouac” was established in the Hooker Valley.  This was a tent site.

1934
First Gardiner Hut built sleeping up to five people. The original materials were taken to Hooker Hut using packhorses and from there, on the backs of guides Mick Bowie, Vic Williams, Percy Williams and Felix Harvey. The builder was A. Leechy of Timaru who was assisted by Vic Williams and Mick. Mick and Vic named the hut after Katie Gardiner—a well-known English climber they had guided over several years.

1977
The old hut was replaced by a barrel-shaped building. The hut was built in Mount Cook village and flown to the site in four loads. It was pieced together over four days on site and slept around eight people. The builders were Mal Clarbrough, Ken Joyce and Ian Whitehouse.

2014
July 16 – a large rock avalanche struck Gardiner Hut, demolishing the toilet and severely damaging the hut. An initial GNS Science assessment estimated that a mass of between 0.5 and 1 million cubic metres of rock collapsed “without any prior warning or apparent trigger”. It travelled a distance of 3.9 km.

2015
March – the hut was cut into sections, the interior stripped out and everything flown to the village.

Katie Gardiner was a leading woman climber of her era. She was a late starter, climbing Aoraki/Mt Cook at the age of 42 in the season of 1928/29, guided by Vic Williams and Lud Mahan.  This was the ninth ascent by a woman.

Katie climbed all year round between New Zealand, Canada and the Swiss Alps over a 10-year period, during which she became known as one the foremost women climbers in the world. She died in 1974 at the age of 88.