Recent heavy rain and the new lake rising has caused restoration work to be postponed.

Work to restore the lost section of track downstream from the Dart Valley landslide has been postponed. Recent heavy rain events have swept away much of the sediment that was resting over the lower slopes of the landslide, moving it downstream. At about the same time, the new lake started rising again. It eventually overtopped the rubble dam and carved out a deep overflow channel, pushing even more sediment over the boulders, gravel and sand already deposited by the landslide.

As a result the bed of the Dart River has been raised even higher than before, exacerbating erosion issues over the first kilometre or so downstream from the landslide. The river is scouring and destabilising this area and the scale of undercutting erosion continues to surprise. Formerly intact hillsides have slipped and new cracks are emerging. Trees have been washed away, some crashing into other trees and producing a tangled mess. GNS Science has needed to rescue their monitoring equipment, which they had thought was safe from the river’s erosive force.

The Department of Conservation and GNS Science will monitor the area to understand when the changing landscape will settle enough to recommence work. DOC Conservation Services Manager John Roberts is frustrated. "In recent months we have toiled to find a new route through very difficult country." John continues, "We hoped to build a basic track around what used to be Sandy Flat, linking up with the temporary track around the new lake. We would then progressively rebuild the track to its former standard."

However the ongoing loss of river bank has forced DOC to pause. "We have to acknowledge that nature is in charge. The river could keep eroding until it meets some nearly vertical bedrock lining the valley edge. John is cautious “If we build a new track too soon, it could again be lost, and our efforts wasted."

John concludes "We cannot start until we are confident a new track will be undisturbed. When we do get going, we are expecting slow progress through steep bluffs. We regret to announce the Dart Valley track may remain closed until at least the New Year". 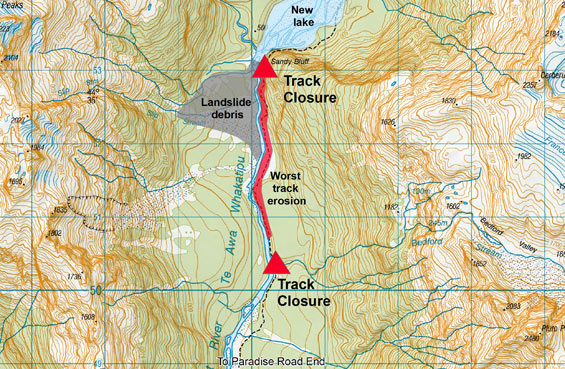 The Dart Valley track is closed between Bedford Steam and Daleys Flat hut until further notice.

This will prevent trampers from completing the Rees-Dart circuit as it is impossible to walk across the powerful Dart River to circumvent the closed area.

Trampers may reach the upper Dart Valley from the Rees Valley or via the difficult Matukituki Valley / Cascade Saddle route. However to return they will need to back track.

During winter these routes are generally impassable.

People may also walk from the Chinaman's Bluff at the Paradise road end to as far asBedford Stream before returning. This provides a fine short walk for visitors to the area.

Commercial jet boat operations are not interrupted by the landslide or resulting river erosion.