The last rāhui placed around the Te Maari eruption centre in August-October 2012 has been lifted by Ngāti Tūwharetoa.

It has been three years since the 6 August 2012 eruption of Te Maari on the northern flanks of Mount Tongariro. After the eruption, rāhui were placed on the volcano to help DOC manage volcanic risks to visitors and staff on the popular Tongariro Alpine Crossing. 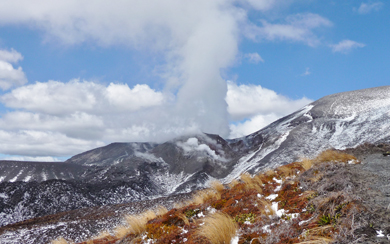 “The rāhui was put in place to advise manuhiri (visitors) that it was not safe to approach the eruption area, in case there was another eruption”, said Te Ngaehe Wanikau. He noted that GNS Science recently lowered the Volcanic Alert Level to 0 (the lowest level) after they concluded that all the monitoring indicators suggested the volcanic unrest associated with the 2012 eruptions was over.

“We have used rāhui for many different reasons in the past, such as respecting the deceased, protecting people or conserving food resources. This rāhui has now served its purpose – ka pai”, he said.

The Te Maari rāhui was put in place as part of a combined management approach to the Te Maari eruption episode (2012-2015) by DOC and Ngāti Tūwharetoa.

The iwi’s tikanga values (cultural tradition and customary practices) are linked to the joint stewardship of the volcanoes by the Crown and iwi, as part of Tongariro National Park and Kahui Maunga. Kahui Maunga is the korowai (clock) that embraces the mountains of Tongariro and Taranaki and the Whanganui River that flows between them.

In October 2012, following the August eruption, the Crossing was reopened with the rāhui extending for a radius of a kilometre around Upper Te Maari crater. “At that time we considered the eruption was probably over but couldn’t be sure. The one kilometre rāhui was put in place taking account of knowledge of previous eruption episodes”, said Dr Harry Keys, DOC’s Technical Advisor-Volcanology.

Five weeks after the reopening a second eruption did occur. As predicted, its hazards only extended for a limited distance, 500 metres, so were entirely contained within the rāhui. People on the Tongariro Alpine Crossing at the time were never threatened despite some perceptions they were. “The rāhui was a practical and powerful example of traditional cultural- and science-based methods working together to achieve a common goal”, said Dr Keys.

DOC and Ngāti Tūwharetoa advise visitors thinking of approaching the crater that they still need to be wary of volcanic and alpine hazards that are still present. Toxic gases are still being emitted with temperatures up to 380°C when last measured by GNS. The ground is still unstable in places, especially around the crater rim, and rockfall continues intermittently in many areas.

DOC continues to work closely with GNS Science who monitor Mount Tongariro for volcanic unrest. Any significant changes to volcanic hazards or risk in the area will be notified to visitors.