Silver wattle growing around Mount Tarawera is being targeted in an inter-agency approach to enhancing natural biodiversity.

Silver wattle growing around Mount Tarawera is the focus of a new weed control project aimed at restoring and protecting biodiversity.

Bay of Plenty Regional Council, DOC and Ruawāhia 2B Trust are tackling the invasive tree weed on the lower slopes of Mount Tarawera towards the Te Ariki end of Lake Tarawera.

Wattle trees are an Acacia species originating from Australia. The weeds established after the Tarawera eruption and have continued to spread over recent years. As the wattle trees mature, they outcompete and smother native vegetation. 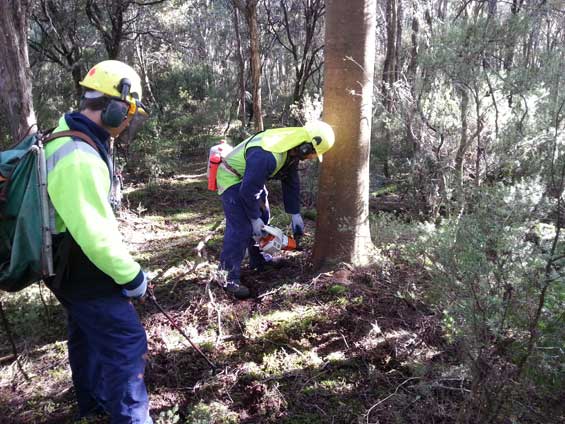 Regional council Senior Land Management Officer Richard Mallinson is concerned about the spread of the wattle trees, “If we don’t step in to stop the spread of these weeds, it’s likely they will continue to spread and grow through the more open areas to become the dominant tree species as has already happened around Te Ariki.”

The project may also reduce nitrogen leaching into the lake as wattles are a nitrogen fixing plant. They take nitrogen from the air and convert it to a form that is used by the plant and the excess nitrogen is leached in to the ground water.

“We are investigating trial work to establish the extent of nitrogen leaching from wattles and the effects it will have on the water quality in Lake Tarawera,” Mr Mallinson said.

The three organisations are continuing a working partnership aiming to enhance natural biodiversity around Mount Tarawera. To date, this has focussed on the Ruawāhia 2B Trust led programme of wilding pine control on the Wahanga, Ruawāhia and Tarawera domes of Mount Tarawera.

“The knowledge, skill and expertise of the crew is second to none,” chairman of the Ruawāhia 2B Trust, Ken Raureti said.

“Our tikanga taiao, our cultural values and our kaitiakitanga guardianship responsibilities underpins everything we do on the maunga. From the wilding pine control work on the peaks, down to the invasive wattles around the base - our crew have worked hard to become experts in their field and are proud of their mahi”.

Wattle control is being carried out while wilding pine control ceases over the winter months.