Introduced wasps are estimated to cost the economy more than $130 million a year, according to a new study.

The study, An evaluation of the cost of pest wasps (Vespula species) in New Zealand, by the Sapere Research Group, was jointly funded by the Department of Conservation and the Ministry for Primary Industries.

Wasps are one of the most damaging invertebrate pests in New Zealand; they harm our native birds and insects and compete for food with our native species. If you put together all the wasps in honeydew beech forests they would weigh more than the weight of birds, rodents and stoats combined. 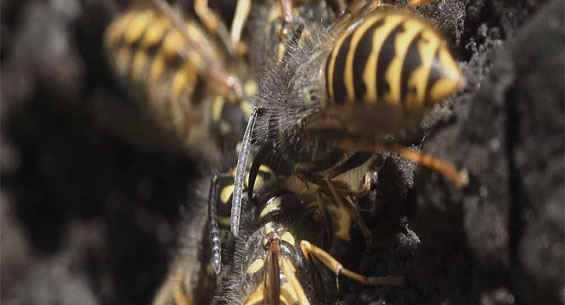 This new study has found that wasps also have a major financial impact on primary industries and the health sector. This includes:

DOC Scientist Eric Edwards says these numbers are conservative. The actual cost of wasps is much higher especially if you take into account the impact on tourism and our love of the outdoors, which this study wasn’t able to measure in full.

“It’s hard to put a dollar value on people’s attitudes to wasps and to what extent wasps prevent them from visiting conservation land or taking part in outdoor tourism activities,” he says.

“But we know that wasps are a massive annoyance and their multiple stings can cause a lifetime effect of making young people reluctant to return to forests and parks,” Eric Edwards says.

“This study shows that it makes economic sense, as well as environmental sense, to invest in research to control wasps,” he says.

“MPI is working with DOC to encourage the science community, and their funders, to further explore a range of tools needed to control wasps in the long term,” Erik van Eyndhoven says.

The MPI Sustainable Farming Fund has recently supported investigations into the biocontrol potential of a new mite discovered in wasp nests.

DOC has been actively working on a programme to better control wasps and has been piloting a targeted bait station method on conservation land.

This study assessed the economic impact of German wasps and common wasps across industries, society and the natural environment in New Zealand.