Partnership between Corrections and DOC

Date:  06 November 2015 Source:  Office of the Minister of Conservation 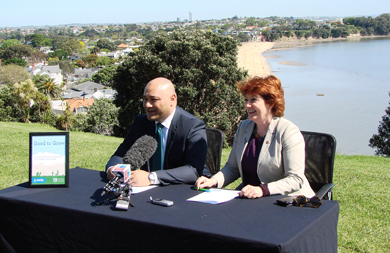 Ministers Barry and Lotu-Iiga at Good to Grow partnership launch

Under the Good to Grow partnership between Corrections and DOC, offenders on community sentences will help look after DOC sites, upgrade and maintain tracks and help to win the War on Weeds across the country.

The ministers signed the agreement today at Maungauika/North Head in Auckland, where offenders on community work maintain the DOC-run reserve.

Mr Lotu-Iiga says the agreement is another step forward in achieving the government’s goal of reducing reoffending by 25% by 2017.

“It is a focus of Corrections to improve rehabilitation and reintegration outcomes for offenders. This means more education and skills training and ensuring offenders are engaged in meaningful work that benefits projects in their local area.

Each year Corrections delivers more than two million hours of community work labour to local projects throughout New Zealand. This agreement creates an opportunity to deliver more of these hours on significant projects in conservation areas.

“There are existing local agreements between DOC and Corrections which include maintenance work such as that at North Head and also growing native plants in prisons,” Ms Barry says.

“This new partnership will take these programmes nationwide and expand the range of work being done.”

DOC has 14,529 km of tracks which require regular maintenance and clearance work, as well as local reserves close to communities which need upkeep and small-scale improvement work such as tree planting.

As part of the War on Weeds, DOC also aims to complete weed control work across 150,000 ha of land each year.

“We will achieve significant conservation gains by involving these offenders in maintenance and weed control,” Ms Barry says.

“It is particularly encouraging to see both departments working towards including an education and qualification component to the work.”