Northland Conservation Board chair Mita Harris welcomed the chance to present their achievements and the results of their hard work to Associate Conservation Minister Nicky Wagner during a site visit to Kerikeri on 14 May 2015.

"The Board is encouraged by the positive feedback received from Minister Wagner," says Northland Conservation Board chair Mita Harris. "Minister Wagner told us she appreciates the importance of partnerships with iwi/hapu, community and other stakeholders to facilitate conservation gains."

Ms Wagner's visit was part of her programme of visits to each Conservation Board around the country to foster strong links between community conservation groups and the Department of Conservation (DOC).

Mita Harris said the Northland Conservation Board was recognised nationally as one of the leading boards in terms of its operations and, in particular, the Board's active engagement with local communities and iwi/hapu.

"We were pleased to speak to Ms Wagner about the recent completion of the Northland Conservation Management Strategy (CMS), and are pleased to be the first Board nationally to complete the new CMS," says Mita Harris. "The Board's main focus is now on monitoring the implementation of the CMS."

Mita Harris said the visit provided an opportunity for Minister Wagner to meet the Board members and to discuss priorities for the Board's work programmes as outlined in the annual letter of expectations from the Minister of Conservation.

Minister Wagner joined Board members, staff from the Department of Conservation and Heritage New Zealand, and representatives from local hapu for an inspection of the Kororipo-Kerikeri Basin development and a visit to Puketi Forest. 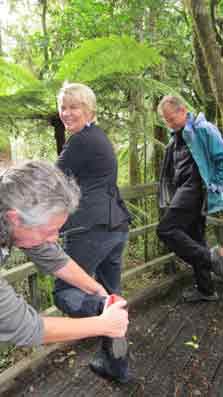 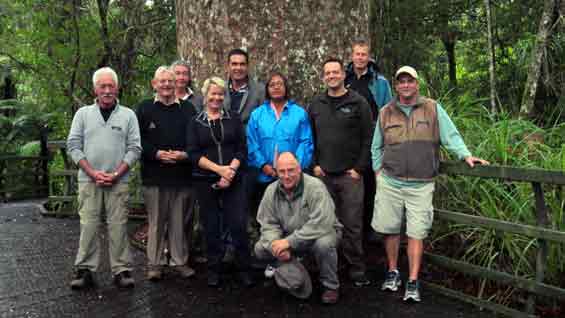 "Kauri dieback, the deadly kauri disease caused by Phytophthora taxon Agathis (or PTA), continues to be a top priority for the Board, DOC and as well as the Minister and Associate Minister of Conservation," says Mita Harris. "While Minister Wagner admired the majestic kauri trees at the Manginangina Kauri Walk in Puketi Forest, the cleaning stations were a harsh reminder that containment of the disease is currently our best weapon."

Mita Harris said Minister Wagner also had a chance to see the progress of the restoration efforts at Puketi Forest and that she supported the good work of the Puketi Forest Trust.

"Since the Trust has been carrying out intensive pest and predator control, bird numbers are gradually increasing," says Mita Harris. "This is great news for threatened species such as the kūkupa/New Zealand pigeon – another key priority for the Board. The greatest threat to kūkupa are predators and illegal hunting. The Board will continue to promote the protection of kūkupa through the Board's 'Save the kūkupa' campaign."

Mita Harris says, "At the Kerikeri Basin, we were pleased to show Ms Wagner the new signage and interpretation panels, which celebrate the important historic, cultural, and natural heritage of the area."

"We were also pleased to demonstrate to the Minister the excellent relationships within the Management Group for the Sustainable Development Plan for the Kororipo-Kerikeri Basin. The Group is made up of the Department of Conservation, Far North District Council, Heritage New Zealand, Northland Regional Council, Te Rununga o Ngati Rehia, and tourism groups. The group worked together very effectively to balance the protection of these significant historic and cultural sites with the provision of a high quality visitor experience."

Mita Harris says, "The Board regularly visits sites around Northland as part of the Board's role in monitoring the implementation of the CMS. The Board will continue to raise awareness at a national level of Northland's natural, historic, and cultural values and the issues affecting them, because these values are important intrinsically but also in terms of Northland's economy and general wellbeing."