Patrick Cooper is the second person in New Zealand to be convicted for importing elephant ivory illegally. 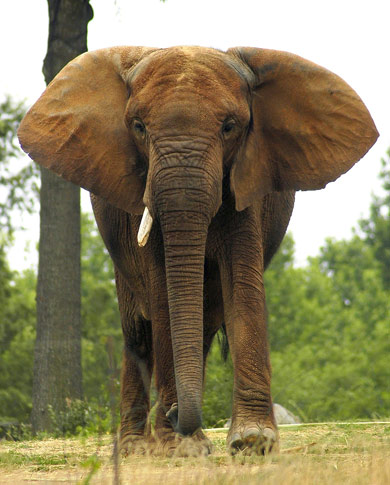 African elephants continue to be killed for their tusks
Image: Valerie | Creative Commons

A 62 year old Napier man has been fined $8,000 for illegally importing elephant ivory.

Patrick Cooper, a natural therapist and carver, of Napier was convicted on five charges of importing African elephant ivory without a permit.

The charges were filed in the Napier District Court by the Department of Conservation (DOC).

Mr Cooper pleaded guilty to the charges in November and is the second person to be convicted for illegally importing ivory into New Zealand, following the conviction of Jiezhen Jiang in Auckland in 2013.

Mr Cooper came to the attention of authorities in 2012, when a carved elephant tusk addressed to him was seized at the International Mail Centre. DOC and MPI staff conducted a search warrant at his Napier home and located further illegally imported pieces of ivory.

"African and Asian elephants are at high risk of extinction because poachers continue to kill them for their tusks despite a global ban on trading in ivory", says DOC Senior Investigator Dylan Swain.

"This conviction sends a message to other would-be offenders that illegally trading in elephant ivory is not worth the risk."

African and Asian elephants are classified as endangered species. A ban on trading ivory was imposed in 1989 by 175 countries that are parties to the Convention on International Trade in Endangered Species of Wild Flora and Fauna (CITES). New Zealand became a party to CITES in 1989.

Importing, exporting or re-exporting any part of a protected species, without the appropriate permits is an offence in New Zealand under the Trade in Endangered Species Act 1989. The maximum penalty for importing ivory without a permit is five years imprisonment and or a fine of up to $100,000

This legislation is administered by DOC. DOC investigators work closely with staff from the Ministry for Primary Industries (MPI) and the New Zealand Customs Service to enforce the legislation. DOC also works closely with internet retailers including TradeMe and eBay to help prevent the international trade in endangered species.

Find answers to frequently asked questions about how CITES is administered and enforced in New Zealand.