The project had been in planning with winter 2015 as a target date but has been delayed for a year until winter 2016. The eradication must take place in the winter when mice numbers are at their lowest and food resources are scarce.

The project had been in planning with winter 2015 as a target date but has been delayed for a year until winter 2016. The eradication must take place in the winter when mice numbers are at their lowest and food resources are scarce.

Antipodes Island mouse eradication project manager Stephen Horn said the delay was due to problems securing and scheduling the required helicopter and shipping services for 2015.

“Expert pilots and specialised equipment are needed for this job which has its challenges, being in such a remote location with inclement weather and the lack of harbour and infrastructure.  We need to take a cautious approach and plan thoroughly to successfully rid the island of mice,” Stephen said. 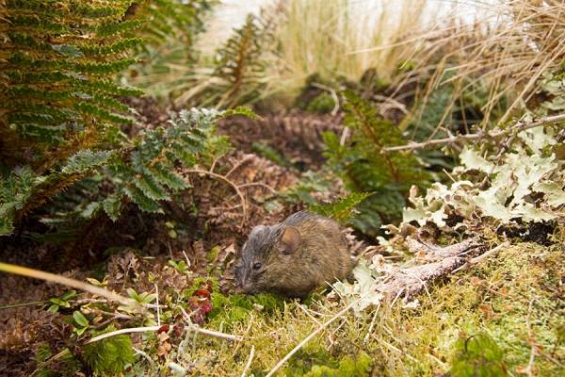 Scientists conducted trials and monitoring in the Antipodes in 2013 and 2014 to understand mouse ecology on the island. This monitoring included work on invertebrates, birds and vegetation. During these trips to the island repairs have also been made to the biodiversity hut, which was damaged by a landslip early last year.

The eradication will be conducted by a team of 10–12 people and will use two helicopters to spread cereal bait containing the rodent toxin brodifacoum. Two separate applications will be made a minimum of two weeks apart. The team may be stationed on the remote and exposed island for 2–4 months, until suitable weather windows allow completion of the job.

House mice have been on the Antipodes for over 100 years and were accidentally introduced by a shipwreck or sealers in the 1800s and are the only introduced mammalian pest species on the island. Research on Subantarctic islands has shown that mice eat invertebrates, seeds, plants eggs and birds and have a detrimental impact on ecosystem health.

The Antipodes Islands and are located 860km south east of New Zealand. This National Nature Reserve is also listed as a UNESCO World Heritage site. Antipodes Island/Moutere Mahue Marine Reserve was created in 2014, at the same time as marine reserves for the other sub Antarctic islands, Campbell Island/Motu Ihupuku and Bounty/Moutere Hauriri islands. The Moutere Mahue Marine Reserve covers the ocean surrounding the island up to 12 nautical miles.

The Antipodes’ unique biodiversity includes a high level of endemism with a number of bird, invertebrate and plant species which are found nowhere else in the world. The islands are also important breeding sites for 21 species of seabirds such as the Antipodean wandering albatross, erect crested and rock hopper penguins and many others.

Monitoring work for fauna and flora species on the Antipodes have been conducted over the past two years for planning purposes and this data will also act as an important baseline for biodiversity prior to the eradication of mice.