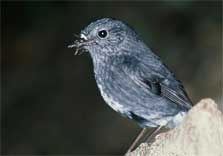 Ten months after North Island robins (toutouwai) were transferred from Mokoia Island Wildlife Refuge to Ōhope Scenic Reserve, a survey has shown a marked increase in robins in the area as a result of successful breeding.

Observational monitoring of the birds indicated that the birds paired up soon after they were released. Monitored birds successfully fledged between 3 and 6 chicks.

"We undertook an informal survey two months after the translocation and although 14 birds were noted, these were all male. Little did we know that the females were already incubating eggs,” explains DOC Ranger Bridget Palmer.

Rats and stoats in the reserve had to be reduced to very low levels before the birds could be translocated. A dedicated team of volunteers continue to maintain a pest control network that targets stoats, ferrets and rats.

“It’s great to see such a fantastic outcome, after all the hard work that the team undertook last year,” says Bridget.

Mokoia Island Wildlife Refuge is home to an array of native plants and birds including kiwi, weka, kokako and an abundant population of toutouwai. Biosecurity measures are in place to protect these species.

“The Mokoia Island Trust consider themselves kaitiaki of the native flora and fauna of our beautiful country, and as kaitiaki were extremely happy to support this release of toutouwai,” says Rawiri Bhana from the Mokoia Island Board of Trustees.

“We welcome a long and mutually beneficial relationship with the Whakatane Kiwi Trust, and with the continued support of DOC, we look forward to helping others increasing populations of our native flora and fauna.”

The New Zealand robin or toutouwai is a sparrow-sized bird found only in New Zealand. They are friendly and trusting, often coming to within a couple of metres of people.